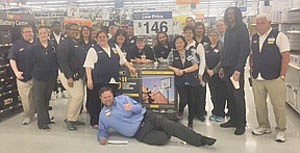 Through Walmart’s “Fight Hunger. Spark Change,” campaign, Maryland residents answered the call for help and generated $211,248.70 for the Maryland Food Bank to fight hunger between April 17 and May 15, 2017. The amount was $80, 000 more than last year. (Pictured) The Walmart Management Team from the White Marsh Store in Baltimore County, Maryland. Courtesy Photo/Walmart

Across the United States, one in eight Americans, including one in three children, struggle with hunger. In Maryland, more than 682,000 individuals are recognized as food insecure, according to the United States Department of Agriculture.

Baltimore residents and those across the state answered the call for help and generated more than $211,200 for the Maryland Food Bank to help fight hunger, according to Walmart Officials.

Walmart’s “Fight Hunger. Spark Change,” campaign, which kicked off on April 17 and ran through May 15, encouraged individuals nationally to take action against hunger and help families in need through simple acts of support online as well as in-store purchases and donations.

Nationwide, the campaign raised more than $19.8 million to support Feeding America and its nationwide network of food banks by sharing campaign messages via social media, donating to local Feeding America food banks in-store at the Walmart register, or purchasing select products that triggered a donation.

“The $211,248.70 raised for the Maryland Food Bank in 2017 is record setting, the amount is almost $80,000 more than last year’s generous donation from Walmart,” said Amy Chase, director of Corporate Relations for the Food Bank.

There were a few reasons for the campaign’s success, including the food bank having sent information to all Walmart store managers in the area, Chase noted.

“We personally educated their team on our mission, in turn making their associates ambassadors for the food bank when asking their customers to donate at the registers and purchase the selected products from the suppliers that triggered a donation,” Chase said.

Also, she said there was an added component this year through Discover where a donation was triggered every time a customer used their Discover Card at the register.

Working with Discover card and five suppliers, including: Campbell Soup Company, General Mills, Kellogg Company, The Kraft Heinz Company and PepsiCo, the “Fight Hunger. Spark Change” campaign proved to be a great example of Walmart’s long-standing commitment to hunger relief and our dedication to ensuring that families have access to affordable, nutritious and sustainably grown food, said Kathleen McLaughlin, president of the Walmart Foundation and chief sustainability officer for Walmart.

“Together with Feeding America, our suppliers and customers, we continue to work in the communities we serve to make a real difference for those who are struggling with hunger,” McLaughlin said.

In October 2014, Walmart announced a commitment to create a more sustainable food system, with a focus on improving the affordability of food by lowering the “true cost” of food for both customers and the environment, increasing access to food, making healthier eating easier, and improving the safety and transparency of the food chain. This commitment includes a goal of providing four billion meals to those in need in the U.S. by 2020, store officials.

“Donations like this go directly toward buying and distributing food to individuals and families in need across the state. Given the fact that every $1 we receive enables us to purchase approximately three meals, that’s equivalent to 633,000 or more meals for food insecure Marylanders,” Chase said.

While the numbers around food insecurity seem to be improving, Chase says there is still a lot of work to be done.

“As it stands now, the level of donations we receive is not keeping up with our ability to distribute food. We could be delivering even more food if we had more financial resources, and that’s why we appreciate campaigns like this that raise awareness around the problem of food insecurity locally and at a national level in an effort to get more financial supporters, advocates, and volunteers,” she said.

“We thank all those who took part and helped provide meals for Marylanders in need,” said Carmen Del Guercio, president and CEO of the Maryland Food Bank.

“Most people focus on donating to food banks during the holiday season, but thanks to this campaign, we’re able to address the issue of hunger during the spring and summer months, when donations are often lowest, Del Guercio said. “That’s why we’re grateful to Walmart and their partners for supporting our efforts to ensure our hungry neighbors have regular access to healthy food,” he said.