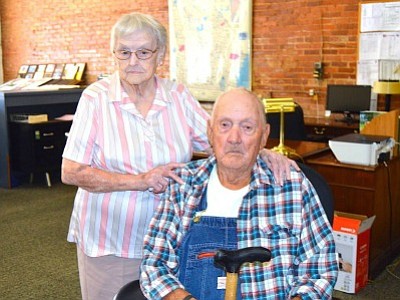 What could be Butts County's oldest set of living twins celebrated their 91st birthday by doing exactly what they chose to do — absolutely nothing out of the ordinary.

Victor Mose "Buster" Brown and his sister Virginia Brown Moss were born and raised in Butts County, with the exception of a brief time they lived in Monroe County when they were 5 years old. The twins have lived in the Four Points area of Old Bethel Road for most of their lives.

"It was the only time we lived out of the county," Virginia said of 1931, when the Great Depression was in full swing and their house burned down.

"All three of us were born there and Mama was too," Virginia said of the old home place. Their older sister Sarah Brown James died in 2005.

"When they get together it's like two young'uns playing," said Buster's son, Bobby Brown.

Their parents first tried to make a go of it in H.E. Brown's home state of Indiana.

"Mother couldn't take the weather so they came back," Virginia said. "They stayed here for the rest of their lives."

Buster is the oldest twin by some 15 minutes.

"Me and him had it not too rough," Virginia said. "When he got in trouble this old girl went to the fence. I guess all twins are like that."

Things were not always rosy. At age 10, Buster found himself behind a mule and plow, leaving his sisters in the fields.

"My sister and I chopped the cotton and this thing would plow the same row, over and over, to get out of it," Virginia said, pointing a finger at Buster.

"There was no such thing as a tractor," Buster said. "It was a two-mule plow with the handles cut down so I could reach them. I've only got two speeds now. High gear and reverse are worn out."

For 86 years now, Buster has lived in the house the Browns moved into upon their return to Butts County. While his nephew handles most of the farm work, Buster still helps out with the cattle.

Buster married the late Carolyn Jane Faulkner on Oct. 15, 1949. They raised their two children, Ibra Osa and Bobby Brown, at the farm. He has three grandchildren and two great-grandsons.

Both the twins went to school in Jenkinsburg and Virginia was a graduate of the Jackson High School class of 1945. Buster, who had dropped out of school, made his required visit to the draft board to sign up for the military. He was turned down due to health reasons.

"I had to stay home and farm," Buster said. "I farmed for two years after Jane and I married and I worked at the pepper plant for 50 cents an hour. Daddy died in 1957 and I went to work building houses with Red (Robert) King. After that I worked with Floyd Moye down in Monroe County. Then I worked for 25 or 30 years by myself building houses and cabinets and stuff."