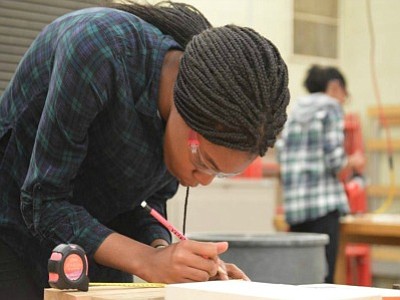 Of all the things about the MAGIC camp that Namoonga Chilomo enjoys, her favorite might be that it's interactive.

"You're learning the work, you're getting to experience it all. You're not just sitting there getting lectured about," said Chilomo, a rising senior at North Springs Charter High School in Sandy Springs. "You're in the studio, in the workshop, doing the work, and you get to create things. That's the whole point. Doing hands-on working creating things, and that's something I enjoy."

Chilomo was among 16 teenage girls at Gwinnett Technical College on Tuesday for the week-long MAGIC camp, which stands for Mentoring a Girl in Construction. The MAGIC camps are in their 10th year. They were founded by Renee Conner, who owns her own construction company, and puts on camps like this across the state and country.

So far this week, the girls have learned about Occupational Safety and Health Administration safety training, tool safety and carpentry skills. By the end of the week, they will attend two field trips to job sites around Gwinnett, like the new office building for construction company Reeves and Young, which is on Peachtree Industrial Boulevard in Sugar Hill.

Conner said she's had four girls intern for her in places like Bartow County after they participated in the camp. Those jobs are precursors to more education at Kennesaw State University, she said.

"It's amazing that they're actually going into these fields, we get to see the light bulb come on," said Conner.

She added that older participants have passed some of their knowledge on to younger girls they've recruited.

The camp again this year offered a 10-hour card from OSHA, which means their safety training is nationally certified. That helps on college and job applications.

On Tuesday, there was the high-pitched screech of saws as girls made the first cuts on memory boxes.

Chilomo said some of her career interests are working with carpentry, masonry, concrete or even architectural design.

Conner said there continues to be a labor shortage in the construction industry, but in recent years, construction employers have made connections in high school and middle school to recruit future workers.

"There was such a wide gap there for a while," Conner said. "Now they're starting to see the value of actually getting the girls at a younger age. That's any student, male or female. … You get them started on a pathway."

Conner said places like Plant Vogtle near Waynesboro are "dying for help," and unions are getting more involved in hiring, along with Georgia Power.

Chilomo said even when schools don't have formal programs, or equipment like Gwinnett Tech does, it's important to take advantage of summer camps like this one to learn skills they can't elsewhere. Chilomo added that she and a friend are now considering Gwinnett Tech because of the equipment and program they're seeing first hand this week.