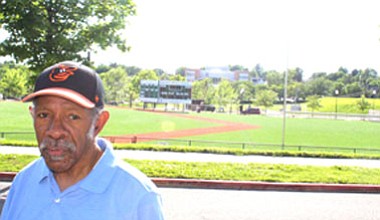 James Batty first worked as a vendor at Memorial Stadium while in high school, selling popcorn, peanuts and hot dogs. His highlight was having worked the 1958 MLB All-Star Game. Now at age 76, he lives in an assisted living facility on the same grounds where Memorial Stadium was located. He faithfully wears his Orioles hat each spring and says he'll always remain a "Birds" fan. Timothy Cox

When James Batty sits on the deck of his senior citizens home in Northwest Baltimore, he sometimes reflects on the times when an empty baseball field across the street, once housed a massive edifice, known as Memorial Stadium.

Now 76, he worked as a vendor first while in high school, selling popcorn, peanuts and hot dogs.

"Minors couldn't sell beer," he recalled. "So I was too young the first time."

His walk somewhat slowed now, and while assisted by a cane, Batty's mind remains razor-sharp. He easily recalls the times when the stadium consistently attracted sold-out crowds and fielded world-championship caliber teams.

Having grownup on the west side of Baltimore on Vine Street, Batty says he never imagined he would someday live on the same property where Memorial Stadium was once located. The structure was built in 1950 and razed in 2001.

In addition to the senior housing facility, the mixed-use property houses a new YMCA and an athletic field used by youth soccer, lacrosse and baseball players. The property boasts an athletic field that's sponsored by the Cal Ripken Sr. foundation, and uses the original diamond set up as did Memorial Stadium. The original home plate was relocated to Camden Yards when the new stadium opened in 1992, according to Bill Stetka, Orioles Alumni Director.

"They did a really good job in developing the area that once housed the old stadium," said Stetka, who formerly served as the team's Public Relations director before assuming his current role nearly ten years ago.

Batty studied to be a cabinet-maker at Baltimore's George Washington Carver High School, where he graduated in 1959. He retired from the City of Baltimore, having worked in the city's wastewater treatment department.

“Somebody's got to do that job, and I did it," he smiled.

One of Batty's many neighbors at Ednor Apartments at Stadium Place is Thomas "Tom" Gilk. At 66, Gilk said he resided in NYC, before relocating to Baltimore as a teenager. The retired chemical operator said he too is a longtime baseball fan, and recalls World Series trips for the Orioles.

Batty also worked as a vendor for the Baltimore Colts before the team left for Indianapolis in 1984. He proudly recalls seeing the likes of Johnny Unitas, Lenny Moore and John Mackey, in their iconic blue and white jerseys and horseshoe-logo hats. He said he enjoyed the warm-weather baseball seasons’ verses the cold-weather NFL schedule.

For the record, Stetka said Memorial Stadium was never in disrepair, but the ball-club needed a venue that could compete with the modern stadiums of the 1970s such as Riverfront (Cincinnati); Three Rivers (Pittsburgh) and Busch Stadium (St. Louis). The large red-brick structure behind right field (at Camden Yards) was formerly a warehouse owned by Baltimore and Ohio Railroad company, which now houses the Orioles' administrative offices.

Camden Yards was once a large railroad loading area where trains off-loaded materials and goods. A sister warehouse is located in Cincinnati, where the Ohio railway route ends, according to Stetka.