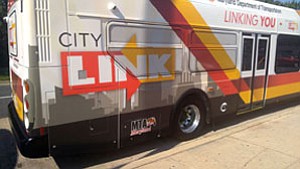 Maryland Department of Transportation overhauled the entire transit system that was based on the old trolley lines to connect transit riders to today’s job centers. After two years of planning, the new Baltimore Link kicked off with major changes last month. MTA officials say that even though it may take riders a little time to get used to, they believe that the new system is a major improvement. Courtesy Photo/MTA

After nearly two years of planning, the new Baltimore LINK service kicked off with major changes and a complete overhaul of the city’s bus system.

While Governor Larry Hogan’s $135 million transportation makeover left many bewildered when the service began last month, the governor’s office says that even though it may take riders a little time to get used to, ultimately, they believe that the new system is a major improvement.

“The goal of Baltimore LINK is to meet the needs of today’s transit riders,” said Sandy Arnette, the director of media relations for the Maryland Transit Administration.

“To accomplish that goal, the Maryland Department of Transportation had to overhaul the entire transit system that was based on the old trolley lines to connect to today’s job centers,” Arnette said. “Anytime you change an entire system, it is going to take time for our riders to learn the new system. We know change is hard, but should get easier once riders are comfortable with their new routes.”

Among the key components of the new Baltimore LINK is CityLink— 12 high-frequency, color-coded bus routes that officials say will improve reliability, and better connect riders to Amtrak, Commuter Bus, Light RailLink, MARC Train, Metro SubwayLink and other services in Baltimore and the surrounding suburbs. The CityLink busses are scheduled to run every 15 minutes during peak service hours.

Signs at bus stops have also changed. All of the approximately 5,000 signs have been replaced by new ones that show the route, where the buses are going, when, and how often.

“We’re seeing high demand on several of our bus [routes] and we’re adding service to meet that demand,” Arnette said.

As an example of MTA meeting the high demand, more service has been added in both directions on the CityLink Orange, CityLink Pink and CityLink Blue lines. The MTA has also added service to LocalLink 34 in Baltimore County, which they say should accommodate passengers traveling to Greenspring Station.

“Moving forward, we encourage our riders to continue this active dialogue,” Arnette said. “To date, we have engaged more than 100,000 people and know that together we can create the best transit system for the Baltimore region.”

The dedicated lanes are indeed helping to move buses faster through the normally congested downtown area on new, red dedicated bus lanes, according to MTA officials.

“Our riders are experiencing the benefits of getting to work faster and, as pointed out in a recent television news report, a trip from West Baltimore to the Amazon Fulfillment Center in Southeast Baltimore took 90 minutes,” Arnette said. “Under BaltimoreLink, that commute time was cut nearly in half to 50 minutes.”

MTA officials are continuing to encourage riders to learn the system to find out how Baltimore Link can best work for them by logging on to: baltimorelink.com or mta.maryland.gov.