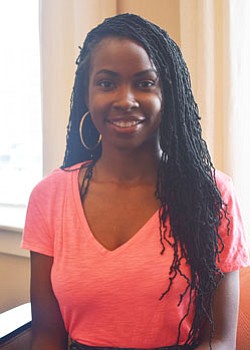 Shanita Ollison is the founder and owner of Nita Key Enrichment, the first, black music enrichment company in North Carolina to serve the children of her community. Research has shown that music helps children improve reasoning, language, intellectual development and can also serve as an outlet to handle anxiety. Taylor Burris/The Carolinian

“College should not make you or break you,” said Shanita Ollison, a 27 year-old “artrepreneur” and the founder and owner of Nita Key Enrichment. “Just

because you didn’t go to college doesn’t mean you can't be a manager of a multi-million dollar company.”

When she was 21-years-old, Ollison decided that she needed to jump into the fight to save music and arts education in her community. After taking on church gigs, a handful of positions teaching music and other odd jobs, she founded Nita Key Enrichment, to serve the children of her community.

Ollison, also known as “Nita,” continues to break down barriers as one of the youngest black women in her field.

Ollison’s investment in the arts for youth comes at the perfect time as music and arts education is losing ground and funding in public schools.

According to a 2012 report by the Department of Education, many students that attend schools in high-poverty, urban school districts still lack access to music and arts programs.

According to The Times-News, due to budget shortfalls in 2011, Transylvania County schools in N.C. faced the elimination of 100 percent of all off-campus band, music, and clubs competitions.

Recently, The Citizen-Times reported that N.C. state legislators and the governor are working to reduce class sizes, a move that could have a negative impact on arts and music education in the state’s public schools.

“Education groups are increasing pressure on state lawmakers to pass legislation they say is needed to avoid poten- tially laying off as many as 4,500 art, music, physical education and foreign language teachers,” The News & Observer reported. “North Carolina school leaders say they may have to cut art, music, physical education and foreign language classes in elementary schools to help pay for new smaller class sizes in kindergarten through third grade that are supposed to start in July.”

Ollison said that music education is not being taken seriously and the benefits of exposing children to the arts are also being ignored.

Research has shown that music helps children improve reasoning, language, intellectual development, and can also serve as an outlet to handle anxiety.

Ollison has partnered with with local schools to create after school music enrichment programs and started a non-profit, Music Is Life, that serves children who can’t afford voice and music lessons. Ollison’s work revolves around instilling the value of learning about all aspects of music including theory, note value, composition, and notation.

The Pamlico County native has reached out to a number of public figures to join her cause including former San Francisco 49ers quarterback Thad Lewis, Miss Black North Carolina Chanda Branch, and Debra Antney, the former manager of rapper Gucci Mane and mother to rapper Waka Flocka.

Despite push back from some N.C. school officials and the tragic deaths of her father and sister, the young artrepreneur continues to press on, inspired by her fiancé, her three year-old daughter and families touched by her work in the community.

“When the schools take something out, we've got to put it back in,” said Ollison. “We need legislators to [get] behind music education.”

Ollison said that if people imagined a world without art and design, they might have a different perspective on arts education.