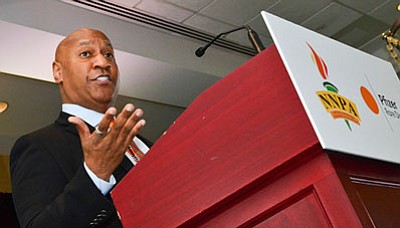 You really don’t know a company, until you know the people who work there.

Those were the introductory words of National Newspaper Publishers Association President and CEO Dr. Benjamin F. Chavis Jr., as he introduced Dr. Kevin Williams, the chief medical officer for Pfizer’s rare disease unit, who discussed the impact of Sickle Cell Disease (SCD) in the African-American community.

At the NNPA’s summer convention in Prince George’s County Md., Williams addressed publishers and others on the serious nature of the illness, an inherited genetic disease that affects hemoglobin, the oxygen-carrying protein within red blood cells (RBCs).

“While normal red blood cells are flexible and oval-shaped, individuals with SCD have sharp, crescent-shaped RBCs that have trouble passing through the body’s blood vessels, irritating the vessels’ lining,” Williams said, explaining SCD.

That irritation leads to the production of sticky proteins that cause RBCs to clump together, along with other cells in the blood, and creates blockages in blood flow, Williams added.

Statistics provided by Pfizer revealed that one in 14 African-Americans have the sickle cell trait at birth while one in 500 blacks have the diseases when they are born.

“Clearly, the disease has had a tremendous impact on the African-American community,” said Williams, who along with Pfizer have partnered with the NNPA to raise awareness about SCD.

The first initiative under the partnership is a national poll conducted in collaboration with Howard University’s Interdisciplinary Research Team.

The goal is to assess the awareness of SCD, the challenges of living with the disease, and the importance of clinical trial participation in helping researchers succeed in developing potential new treatments.

Pfizer and NNPA publishers also want to bring attention to the everyday suffering of SCD patients, many of whom described the constant fatigue associated with living disease; one participant said that the pain was a never-ending battle, and it felt like living in Hell.

Studies have also proven difficult, as many African-Americans have avoided participating in clinical trials due to long-standing fear and distrust of the healthcare system.

In a review of 174 sickle cell disease trials, difficulty with enrolling patients was among the stated causes in nearly half of the 30 percent of the trials that were terminated early, Williams noted.

Chavis, Williams and others noted that the partnership between Pfizer and NNPA might help.

“We get an opportunity to work with Pfizer on a commitment to improve the quality of life in black America” said Chavis. “This collaboration with Pfizer provides an opportunity for the NNPA to inform and educate the readers of our 211-member, black-owned newspapers in more than 70 markets across the country on Sickle Cell Disease, an often misunderstood disease that has a profound impact on the health and well-being of those affected.”