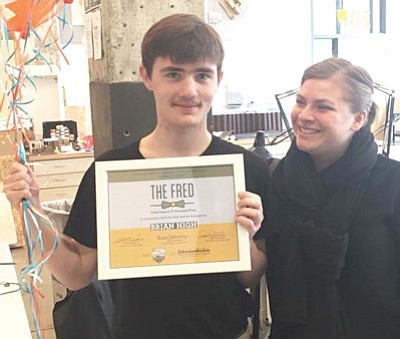 Brian High receives his award from Rebecca Belleville, Arts Education Coordinator at the Baltimore Office of Promotion & The Arts. As the winner of the fourth annual Fred Lazarus IV Artscape Prize, known as “The Fred,” Brian’s work will be on display at Artscape from July 21 - 23, 2017 in Baltimore City. Courtesy Photo

BALTIMORE — Brian High just couldn’t believe it. The 11th grade architecture student at the Baltimore Design School had just been told that he was the winner of the fourth annual Fred Lazarus IV Artscape Prize, known as “The Fred.”

Brian knew the competition was stiff, with dozens— if not hundreds— of others having entered the contest.

“At first, I didn’t believe that I could win. I doubted I could win against other competitors,” said Brian, who lives in Baltimore City and whose interest in photography began around the age of 10, when he first started creating stop-motion animations using his model trains.

“I felt that the Artscape exhibition would be a good chance to display my new photographs from recent visits to museums,” he said.

With the win, Brian received a $1,000 award and an undisclosed stipend to produce a solo exhibition, which will be on display at the 36th annual Artscape, which takes place on Mount Royal Avenue and Charles Street in Baltimore from July 21-23, 2017.

Additionally, the free festival showcases visual artists from the Baltimore region and beyond through an artists’ market, outdoor and indoor exhibitions, prize programs and more.

“I have already picked out the pictures, so now I will have them printed and framed. I feel a little nervous about displaying them in front of a crowd of people,” said Brian, whose interest over the years has developed into visiting rail museums in the region and photo-documenting what he labels as “The Survivors,” his winning Artscape entry.

“I’ve been working on photos in the Survivor series for three years. For this entry, I wanted to use detail photographs that showed the letters and numbers, and classification of engines and cars,” Brian said.

Brian also noted that the next museum he would like to visit is the Virginia Museum of Transportation in Roanoke.

When he was 10, Brian said he began to see trains and cars as beautiful works of art, as it relates to the field of interior and exterior design. He says that trains still motivate him.

“Being an artist means making a big difference. I want to make viewers see that historical means of transportation have not been forgotten,” he said.

Brian says he has been saving his prize money but still may share with family members.

He plans to continue earning money to attend college where he would like to study theater arts and costume making.

For now, Brian continues to look forward to showcasing his work at ArtsScape.

“I have already picked out the pictures, so now I will have them printed and framed,” he said. “I feel a little nervous about displaying them in front of a crowd of people.”