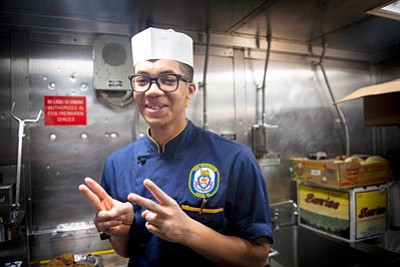 USS Stethem — At age 18, he decided to escape home, a decision which eventually brought him to the middle of the Philippine Sea surrounded by an unfamiliar crew— all of whom are more senior to him.

Culinary Specialist Seaman Kirk Aaron Briscoe Jr., from Baltimore, Maryland, is the most junior Sailor aboard the Arleigh Burke-class guided-missile destroyer USS Stethem (DDG 63). He joined the Navy in November 2016 and reported to Stethem just a few weeks before the ship left for patrol in late February 2017.

When he arrived at Stethem, Briscoe left behind a troubled past.

“My Father was a heroin-addict,” said Briscoe, “And my Mom ... stuff between us was pretty rough.”

He said as he was growing up, he did not follow in his father’s footsteps, he knew he needed to do something better with his life. While in high school, he participated in the Reserve Officer’s Training Corps (ROTC). When he graduated instead of pursuing college, he chose to enlist.

“I enjoyed it [ROTC] so much, I decided to do the real thing,” said Briscoe.

On Stethem, Briscoe finds himself as part of a bigger Navy family. He is part of a crew, which has the opportunity to participate in the annual bilateral exercise MultiSail 17.

During MultiSail 17, six U.S. Navy and two Japan Maritime Self-Defense Force (JMSDF) ships come together in the waters near Guam to conduct the exercise that aims to demonstrate both nations and their navies’ capabilities in maritime security operations, anti-submarine and air defense exercises and of course, cooperation.

MultiSail 17 is the first exercise, and underway period, Briscoe has participated in.

“Where I’m from in Baltimore, it’s rare you ever get out unless you go to school or do sports,” Briscoe said. “I’ve already been [to] so many places, I never could have before like Japan and Guam.”

The Baltimore-native instinctively appreciates the value of the exercise.

“It’s a win for both nations. We create bonds; simple exercises like this create a kind of trust, like between friends,” Briscoe said. “And that comes into play when we need each other’s help.”

While Briscoe may not be firing weapons or standing watch operations during the exercise, he sees his role in the galley as an important one.

“I’m always here trying to be happy,” Briscoe said. “We all have our ups and downs but I try to keep people smiling both in and out of the kitchen.”

His positive attitude boosts the morale of the crew.

“He always seems to have a smile on his face, even on tough days,” said Personnel Specialist 2nd Class Joshua Borromeo. “He knows how to keep his head up.”

Briscoe believes the gumption that brought him from the streets of Baltimore will take him far in his career in the U.S. Navy.

“I want to be MCPON (Master Chief Petty Officer of the Navy), or go officer,” Briscoe said. “It’ll be hard, but you never know until you try. You just have to keep your head up and keep trying.”

For now, Briscoe will keep encouraging the crew and becoming a leader among Sailors in the Stethem crew.