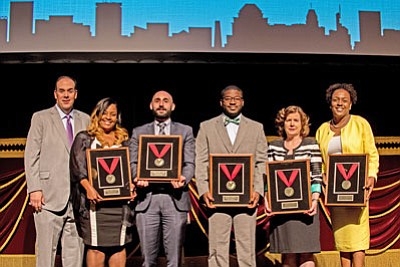 Ten prinpipals from Baltimore City Public Schools were honored at the Hippodrome at the Second Annual Heart of the Schools Awards for the pivotal they play in the success of their schools and students on May 22, 2017. (Above, left to right) Roger Schulman, president and CEO, Fund for Educational Excellence with five of the honorees; Crystal Harden-Lindsey, principal, Green Street Academy in West Baltimore; Christophe Turk, principal, George Washington Elementary in Southwest Baltimore; Samuel Rather II, principal, Calvin M. Rodwell Elementary in Northwest Baltimore; Roxanne Forr, principal, Cecil Elementary School in Northeast Baltimore; Tammatha Woodhouse, principal of the Excel Academy at Francis M. Wood, an alternative high school in West Baltimore, which serves students who have struggled to find success in other school environment. Courtesy Photo/Heart of the School Awards

BALTIMORE — For many students across Baltimore, May is prom time but thanks to the Fund for Educational Excellence, Baltimore City Public Schools’ principals enjoyed a festive and fun spring celebration of their own.

Ten City Schools’ principals were honored at the Hippodrome during the Second Annual Heart of the Schools Awards on May 22, 2017.

John B. King, Jr., CEO of the Education Trust and former U.S. Secretary of Education, encouraged the principals to build foundations of love and hope in the future.

“I want to thank the principals in the room for leading from a place of love,” King said. “For understanding that at the foundations of schools are relationships. You give them that word of encouragement at the end of the day and ensure them you’ll be right there tomorrow to love them and stand for their success.”

Five grand prizewinners, from a diverse array of public schools were selected through an extensive nomination and review process and received a $2500 award to support programs and initiatives.

Tammatha Woodhouse, principal of Excel Academy at Francis M. Wood High School, one of the night’s winners. Marveled in her acceptance speech she said, “this is the first time that an alternative school has been honored.”

Roxanne Forr, principal of Cecil Elementary School, gained credibility in the community and the confidence of a staff that has seen their principal serve the Northeast community, as well as the school for more than a generation. Forr has been Cecil’s principal for nine years but has worked there—her “home away from home”— her entire career.

“I have been fortunate in my tenure at Cecil to have been surrounded by great mentors, teachers who are eager to learn, caring parents, and giving partners all for 30 years,” said Forr.

For Samuel Rather II says serving as principal at Calvin M. Rodwell Elementary School opens up opportunities to defy stereotypes every day.

“Why is it that when I tell people that I work for Baltimore City Public Schools it is naturally assumed that I work with discipline or athletics? I wonder if it’s the same reason that I was written off as a problem student who didn’t care about school,” said Rodwell who is a young African-American male. “You couldn’t have told me as a kid that I would be a teacher, let alone a principal. But something changed.”

Crystal Harden Lindsey, a native Baltimorean was honored for her work to make Green Street Academy a comprehensive, wrap around community school, where everyone in the West Baltimore neighborhood near the school is welcome.

“I believe that strong educators can change the trajectory of students across our nation while simultaneously, transforming communities in impoverished areas,” Lindsey said. “Education can be the currency to defeat poverty.”

Christophe Turk, in his fourth year as principal of George Washington Elementary in Southwest Baltimore shares a love for his students, staff, parents and the community that radiates from the hugs and handshakes he freely gives at school all day. Turk has also served as the leader of the advocacy movement led by principals in City Schools to support additional funding.