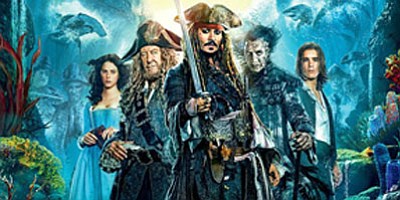 Pirates 5, a Jerry Bruckheimer production, is Rated PG-13 and is in theaters nationwide. To see the trailer for the film, visit: www.Pirates.Disney.com/Pirates-of-the-Caribbean-Dead-Men-Tell-No-Tales Courtesy Photo/Walt Disney Studios

BALTIMORE — I must admit this is the first time that I’ve ever seen one of the Pirates of the Caribbean installments and it was fun, thanks to Johnny Depp’s superb comedic timing in his portrayal of Jack Sparrow.

The Walt Disney Studios motion picture presentation of Pirates of the Caribbean: Dead Men Tell No Tales is the fifth installment of the movie franchise. Johnny Depp, who has been nominated three times for an Academy Award, owns the role of Captain Jack Sparrow again making the film bigger than life. It is clear to see why Depp has been asked to return to the leading role time and time again. He was also involved in the writing process announcing to the public that Pirates 5 will be the last.

In Pirates 5, Captain Jack Sparrow is down on his luck but there are many who still need and believe in him. They want his help to steal the Trident of Poseidon, an artifact that gives the owner the ability to control the seas. Sparrow wants to control the seas in order to free his ship, the Black Pearl.

A young thief, Henry Turner played by Brenton Thwaites, frees Sparrow from the guillotine so he can join the journey to find the Trident of Poseidon. His motive, however, is to see his father Will Turner (Orlando Bloom) again. Turner, a blacksmith and captain of the Flying Dutchmen, which was lost at sea. To make the journey, the two are in need of a map, which is in the possession of Carina Smyth (Kaya Scodelario), an astronomer, about to be put to death for witchcraft. Turner rescues her and Sparrow. She reluctantly joins them only because the map leads the orphaned girl to her father. Who her father turns out to be along with the adventures that occur while on their quest with the mind-blowing special effects make this fantasy film directed by Joachim Ronning and Espen Sandberg a winner.

Pirates 5, a Jerry Bruckheimer production, is Rated PG-13 and is in theaters nationwide.

Eunice Moseley is a public relations strategist and business management consultant for Freelance Associates and is promotions director (at-large) for The Baltimore Times. For more entertainment news, visit: www.ThePulseofEntertainment.com.