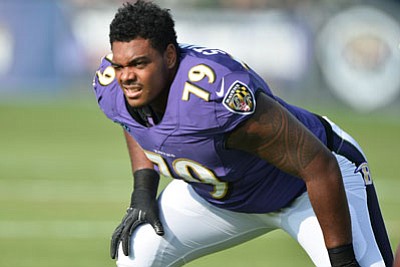 Ravens left tackle Ronnie Stanley warms up before taking the field during training camp in 2016 at the Under Armour Performance Center in Baltimore. Courtesy Photo/NFL.com

BALTIMORE — The Baltimore Ravens have forged their identity as an old school physical team. That's the way their head coach John Harbaugh was raised. The hard-nosed mentality is one that General Manager Ozzie Newsome looks for when he evaluates prospects.

Former offensive line coach Juan Castillo did an outstanding job working with his group before moving on to the Buffalo Bills during the off-season. The Ravens now have Joe D'Alessandris coaching the offensive line.

Harbaugh has eagerly tried to revisit the success the team had running the ball back in 2014 when they gained a total of 2,019 rushing yards. Baltimore's ground game was the No. 8 rushing attack in the NFL under then offensive coordinator Gary Kubiak.

A large part of the success can be credited to their interior linemen, guards Marshal Yanda and Kelechi Osemele, as well as Jeremy Zuttah at center. Osemele is now with the Oakland Raiders while Zuttah has moved on to the San Francisco 49ers.

Yanda is the only remaining starter from that unit. The left tackle position will be held down by 2016 first-round pick Ronnie Stanley who is returning from a successful rookie season.

Stanley is an athletic tackle that can hold his own against some of the top pass rushers in the NFL and clear ways for running backs to get to the second level of the defense.

Second-year player Alex Lewis will likely man the left guard position next to Stanley. Having played mostly at tackle when he was in college, Lewis is looking forward to the opportunity to move inside.

"You get to pull, hit people and you’re always helping out, whether it’s Ronnie [Stanley] or the center," Alex Lewis said after OTAs last week. "It’s a lot of fun at guard, pulling around the front side, pulling around to the outside, and there is a lot of versatility at guard, and it’s right there in your face. It’s you against me."

The rest of the offensive line is yet to be determined. Baltimore has two pure centers on the roster in rookie Brandon Kublanow and second-year player Matt Skura. Ryan Jensen and John Urschel have both seen game reps in the past. Jensen has been a spot starter for the Ravens when Zuttah was injured.

Fourth-round pick, Nico Siragusa figures to be in the mix to start at right guard. His mauling style of play fits what the Ravens want to do on offense.

Fellow 2017 NFL Draft pick, Jermaine Eluemunor could be another option for Baltimore at right guard. At 6-foot-4, 330 pounds, he has an imposing physical presence that will wear down interior defenders as the Ravens continue to pound the ball inside late in games.

An intriguing option to fill out the Ravens offensive line is Stephane Nembot. He has a rare blend of size and athleticism that he showed while playing tackle at Colorado.

Nembot is a raw prospect, which is why he went un-drafted in 2016. However, with the right coaching, he can develop into a solid option at right tackle.

James Hurst is the likely starter at right tackle when the Ravens open up training camp. He is the most experienced tackle on the team. The fourth-year player started three games in 2016 and eight games in 2015.

With the right blend of coaching experience and developing players, the Ravens may be able to establish a long-term unit that can grow together.