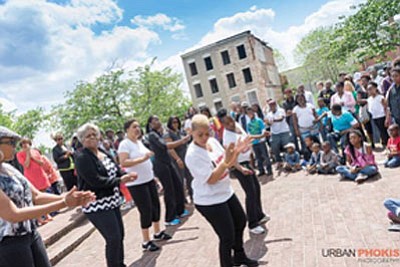 BALTIMORE — Residents of Central West Baltimore will gather on Saturday, June 3, 2017 for the 10th annual Boundary Block Party at the Pennsyl

Food is free for anyone who brings their voter registration card or registers to vote at the No Boundary Block Party on Saturday, June 3, 2017 at Pennsylvania Avenue Triangle Park located at Fremont and Pennsylvania Avenues in West Baltimore.

Organized by the largest advocacy organization in West Baltimore, The No Boundaries Coalition and Pennsylvania Avenue’s own community arts program, Jubilee Arts, the Boundary Block Party is an annual event that brings residents in the 21217 together across race and class lines.

Featured entertainment includes: Eze Jackson, The Baltimore Twilighters, Dynamic Force, Abou The Flute Maker, and Mova Kween and more. Food is free for anyone who brings their voter registration card or registers to vote at the event. The event is free and open to the public.

The Boundary Block Party was started by a group of residents from five neighborhoods in 2007 to create a space for residents to come together in the largely segregated area of Central West Baltimore. After three years of hosting the annual block party, residents met in the basement of a church for the founding meeting of the No Boundaries Coalition. Since 2010, the Coalition has grown into a nationally recognized advocacy organization that has pushed for police accountability in Baltimore City’s consent decree, opened a community-run produce stall, and tripled voter turnout in Sandtown.