Book Review: The Hate U Give 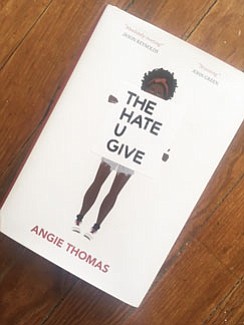 Angie Thomas’ The Hate U Give is a young adult novel that fully speaks to the sense of confusion, rage and powerlessness in the African-American community regarding police brutality and poverty, both symptoms of the racism that still exists in America. Courtesy Photo

BALTIMORE — Angie Thomas’ The Hate U Give is a young adult novel that fully speaks to the sense of confusion, rage and powerlessness in the African-American community regarding police brutality and poverty, both symptoms of the racism that still exists in America.

Starr Carter, a young teen girl who lives in Garden Heights, a black neighborhood considered ‘the ghetto,’ rushes out of a party amid the sound of gunshots with her childhood friend, Khalil. While driving home from the party, Khalil is pulled over by a white police officer because of a broken taillight. What should have been a routine traffic ticket turned deadly when the police officer shoots Khalil in the back.

With high profile deaths of unarmed black men and women, which have gained national attention over recent years, it’s of no surprise that a novel such as this one has come along at precisely the right moment.

Throughout the novel, Starr wrestles with the burden of having to speak out about the death of her friend, while navigating a second world at a predominately white school, Williamson.

Despite providing commentary (albeit fictional) on a pressing, hot-button topic about the value of black lives, the novel’s colloquial writing style, constant references to 90s pop culture, and the obsession with material items such as Nike Jordans, cheapens as well as detracts from the overall message. It puts a reader unfamiliar with past and current pop culture, and the nuances of African-American vernacular at a disadvantage.

Raising awareness about police brutality and the mixed emotions that accompanies this issue, including respecting authority versus challenging the abuse of authority is clearly the novel’s main focus. The profanity, slang and conversational, matter-of-fact way that the author chooses to relay this message downplays the severity of the role that law enforcement plays in the lives of African-Americans. A younger reader might understand this particular writing style, which easily addresses issues in a blunt and direct way, but it simply lacks emotional depth.

Where Thomas succeeds is in Starr’s internal conflict and her struggle with how to identify in two different social environments. Garden Heights is a black ‘hood’ where the threat of gang violence is always close at hand. Starr is comfortable around people who look like her. She can be herself in Garden Heights while not having to explain her very

existence. Eventually, Starr has to emancipate herself from the mindset that being poor, and coming from ‘the hood’ is not good enough and is something to be ashamed of.

Around her non-black friends at Williamson, she adjusts her emotions, mannerisms and speech accordingly. There is a battle with how she thinks she is supposed to ‘behave’ around ‘others.’ Mastering the experience of being in two different worlds is a relatable obstacle, all too familiar to the average person of color who may find themselves in situations where being the only one, “the token,” and the representative of their race is unavoidable.

Thomas skillfully explores the mental strength it takes to live in a gang infested war-zone where dying is like falling and scraping your foot against a rock’s sharp edges. It’s inevitable if one isn’t too cautious or aware.

The sub-plot consists of a gang leader, King Lord, who reigns over Garden Heights threatening anyone who poses a threat to his drug operation with violence. The code of silence and the ‘no snitching’ policy is addressed in the plot as being problematic when it refers indirectly to protecting someone who is the main source of violence.

Even though gang violence is mentioned as a symptom of the cycle of poverty, it was all very cliché, predictable and obvious. We’ve heard it all before in various ways. It would be interesting to see more black writers stepping out of the gang, slave narrative and the dysfunctional family trauma storylines of black life.

If a recent or aspiring recruit of the Black Lives Matter movement, no matter the race, wants to understand the complex history the African-American community has with law enforcement in the United States, The Hate U Give is and appropriate starting point to gain some insight. It is fast-paced, funny and easy to devour with a few touching moments sprinkled in. It’s a novel of the times but a specific time nonetheless.

It is difficult to foresee if this story will have any lasting impact or true influence, which is truly unfortunate because the subject matter at hand could have been more compelling in the hands of a far more capable writer.