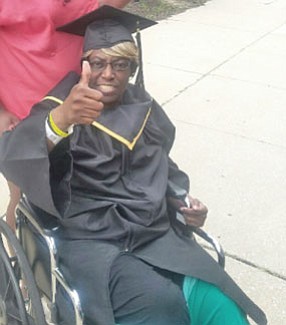 BALTIMORE — There was a lot of whooping, a little bit of hollering and endless hugs and tears of joy on display at the Lyric Opera House this past weekend. The jubilant sounds were the sweetest music to the ears of the Baltimore City Community College’s 2017 graduating class. The city’s only public community college concluded the college’s 70th anniversary year with graduation ceremonies held in midtown Baltimore.

BCCC’s 2017 graduates range in age from 18 to 70 and hail from 100 countries including: Belarus, the home of class valedictorian Larysa Paliashchuk, who traveled from a small town in the Eastern European country to study at BCCC. Paliashchuk expressed love and gratitude for BCCC and the opportunity it represents for students from many cultures and experiences.

“All of us came from different backgrounds, families and upbringings. We all have different stories to share. But today, we’re graduating as one,” Paliashchuk said.

Mayor Catherine E. Pugh, the keynote speaker for the occasion, recounted the tenacity and endurance BCCC graduates displayed to make it successfully to graduation.

“I know that for many of you this has not been easy. Some have struggled, working every day trying to make sure family needs and obligations were met,” Pugh said.

Pugh’s speech was punctuated with “amens” and affirmations of “yes that’s right” from the audience as she encouraged graduates to continue the next chapter of their lives with the same resolve used to juggle multiple priorities and steer through obstacles to arrive at graduation.

“Others slipped into classrooms between getting children off to school and helping them with their homework in the evening and working eight hour shifts. Regardless of your struggle, today you all have arrived at the same place. You may not have come here today at the same pace— but you all are here,” Pugh affirmed.

Student Success Center Advisor, Tanya Deshields celebrated as intensely as her graduates and their parents when students were called to the stage to receive their degrees.

“To see the success of students who graduate from Baltimore City Community College [is] what we look forward to each year,” Deshields said. “A lot of our students have different struggles, different challenges and to see them make it to the stage to graduate means they are overcomers.”

Ultimately, BCCC graduations are family affairs. For Denise Burrus-Moseley, like many other BCCC graduates, graduation day is as much a milestone achievement for family as it is for the graduate.

Denise’s husband sat quietly on the edge of his chair, waiting for his wife to be called to the stage. Burrus-Moseley suffered a stroke just two weeks before graduation, but Dennis said she insisted on being present for the ceremony. So the family sprang into action to support her on her special day.

“We had to roll her in from the nursing home. She just had to come here,” Moseley said.

Denise, who earned her Associate of Science Degree in Nursing has worked for 32 years as a nurse and was determined to take her love of caring for others to the next level.

“She went through so much to get this degree. She’s done a fine job. She deserves it,” Moseley beamed. “My daughters, her grandchildren and all of her loved ones are so proud to see her here today.”

Like many newly minted BCCC graduates, Regine Gambrell, a Baltimore native is on her way to “paying it forward” for Baltimore, as Mayor Pugh encouraged during her speech. Gambrell, who earned her Associate of Arts in Allied Human Services, hopes to open group homes for children in Baltimore after obtaining her bachelor’s and master’s degrees in social work.

Exuberant and with degree in hand, Gambrell summed up the pride and possibilities expressed by her fellow BCCC graduates.

“It feels really, really good. It feels like I can do anything,” she said, glowing. “I’m not going to stop because this world really needs me.”