Maryland State Youth of the Year to Compete in New York 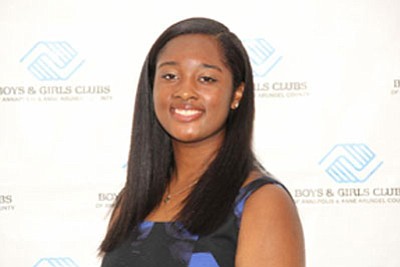 BALTIMORE — Anne Arundel County resident, Sydney Williams was named Maryland State Youth of the Year by the Boys & Girls Club of America, an honor that will allow her to compete in the Northeast Regional Finals in New York on Monday, June 19, 2017.

A victory there means Sydney would advance to the National Youth of the Year Gala in Washington, where one young person will be named Boys & Girls Clubs of America’s National Teen Spokesperson.

“I was truly shocked because there were some amazing candidates this year, but I felt proud of the fact that all of my hard work was paying off,” said Sydney, a junior at Indian Creek Upper School in Crownsville who was awarded $5,000 for her victory.

After high school, she plans to attend an Ivy League School where she’ll pursue her dream of becoming an obstetrician.

“I'm really happy that I get to represent the Boys and Girls Club for the state of Maryland and I'm excited to go on to regional competition,” she said, crediting her parents with her success. “Whatever my goal, they are always there to help me through the process.”

The Youth of the Year title counts as the most prestigious honor bestowed upon an exemplary young person in recognition of leadership, service, academic excellence and dedication to living a healthy lifestyle, according to a news release issued by the club.

“We are extremely proud of our daughter. At a young age, Sydney have set personal goals for herself to strive for success in academics, sports, and being a good steward in her community,” said Sydney’s mother, Antonia Williams.

“The fact that she was even recognized cannot begin to express how overjoyed and pleased.” Williams said. “As parents, we face the challenge of keeping both of our children focused on accomplishing whatever goals and dreams they have for themselves when they are constantly surrounded in an environment of distractions such as social media and peer pressure.”

Williams noted that an open line of communication is kept with her children, which has helped in facing any challenge that has presented itself.

“Sydney has a younger brother named Mason who thinks his sister is, as he says, awesome,” Williams said.

Usually one of the first students at school and among the last to leave daily, Sydney is a junior counselor of the Anne Arundel County Boys and Girls Club; plays varsity soccer, Lacrosse and basketball. She is also a board member and a volunteer at the Chrysalis House Inc., a treatment facility for women with substance abuse; a member of the National Society of High School Scholars Honor Society; and a member of the Student Government Association.

“[All of] these activities and still managing to maintain a 4.2 GPA— in my opinion, this sets her apart from other young people her age because she pushes herself,” Williams said.

She also praised the staff at the Bates Boys & Girls Club, whom she says dedicate their time to ensure that children across Anne Arundel County have a safe, nurturing environment to go to.

When asked if she feels nervous going into the Northeast Region Finals she said to a certain extent.

“More so than nervousness, I feel excitement,” she said. “Making it to Regionals is an amazing opportunity, and I'm anticipating making lasting connections with other Youth Leaders.”

When asked what advice she might provide other potential young leaders, Sydney replied, it’s important they are not afraid to take risks and try new things.

“You never know what opportunities may arise from it. I would also tell them to never be afraid to advocate for themselves and to fight for what they believe in,” she said. “Every great leader that has changed the world started somewhere and the next one could be you.”