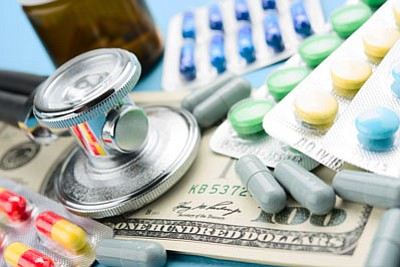 Known as "Part D," Medicare's drug benefit keeps costs down by forcing private insurers to compete for beneficiaries. Seniors are happy with their choices. About nine in 10 are satisfied with their Part D coverage, and 85 percent say they get good value from the program. ClipArt.com

WASHINGTON — Tens of thousands of seniors owe their lives to Medicare's prescription drug benefit, according to a new study from the University of Illinois. The program reduces mortality rates among the elderly by more than two percent annually and it costs far less than government actuaries originally predicted.

Put simply, Medicare's drug benefit is a resounding success. Yet some lawmakers and White House advisors want to overhaul it. The changes they're proposing could put seniors' lives at risk.

Here's how the program works. Insurers bargain with drug manufacturers to secure big discounts on medicines. Drug companies are willing to give those discounts, since insurers can make the medicines available to a huge number of customers. Once insurers have secured these discounts, they develop a variety of different plans, with a varying mix of covered medicines, deductibles, and premiums.

Insurers then submit these plans to the Centers for Medicare & Medicaid Services for approval. Once CMS approves the plans, insurers can market them to seniors. Seniors then choose between competing insurance plans, picking the ones that best fit their needs. Nationwide, 41 million Part D beneficiaries can pick from nearly 750 different plans. Many of these plans offer premiums under $20.

Seniors are happy with their choices. About nine in 10 are satisfied with their Part D coverage— and 85 percent say they get good value from the program.

Fierce competition between insurers has kept premiums much lower than anticipated. In its first decade, the program cost 45 percent— $349 billion— less than originally expected.

Despite this success, some policymakers are advocating for the federal government to push private insurers aside and negotiate drug prices directly with pharmaceutical companies.

Such a change would likely lead to fewer drug choices for seniors. The Congressional Budget Office already has concluded that the only way the government could secure significant discounts would be to establish a "formulary," or a list of

approved medicines. If government officials decide to leave a drug off the formulary, seniors wouldn't be able to obtain it, regardless of which plan they chose.

The Veteran's Administration already uses this formulary model. Government officials decline to include one-fifth of the 200 most-prescribed drugs for seniors on the VA formulary. Veterans who need those excluded drugs have to pay for them out of pocket. If they can't afford them, they're often out of luck.

Paul Downey is the president and CEO of Serving Seniors.