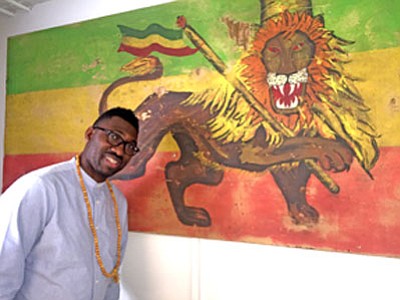 BALTIMORE — Baltimore Center Stage has announced its exciting 2017-2018 theatrical season, having recently undergone a yearlong $28 million renovation, and continues to extend its reach into the community with initiatives such as its Mobile Unit, which takes performances into underserved areas.

Behind the scenes, directing it all, is Artistic Director, Kwame Kwei-Armah. Now in his sixth year at the theatre, which is located on 700 Calvert Street, Kwei-Armah talked about all of the action that is taking place at Baltimore Center Stage.

“It was a steep learning curve when I got here,” said the Great Britain native. “I had never been an artistic director before or a gatekeeper. It has been filled with huge learnings, but the challenges have made me stronger. I’m terribly proud of the fact that the things I said I would do when I got here, have been done.”

He added, “We have opened up the building, which I believe makes it more inviting, and are doing more daring work. I felt the building was not as inviting and as energetic as it could have been. We launched a capital campaign and began to renovate. We want to provide access to all, and for people to feel invited when they come in. We also changed our lobby to make it more open and congenial.”

The Pearlstone Theater on the first floor has been updated with new lighting and sound capabilities. The Head Theater has been completely redesigned, and features a seating plan with multiple configurations, so theater seating can potentially be different for every show based on the demands of the productions.

Other changes at Baltimore Center Stage include the addition of ‘Baltimore’ to its name, a new logo, and a new website.

“We are digging deeper into community,” said Kwei-Armah. “What's important for me is to see an augmented community center where multiple communities can come together and commune through the arts. I want this art form to be accessible to as many people possible, and I want more people to be a part of the Baltimore Center Stage family.”

He added, “We have to look after each audience specifically and generally. I came here because I wanted to produce plays I thought were good, but that would also speak to my cultural end. I wanted the African-American community to feel more invited through shows such as Jazz and Twisted Melodies.”

“Jazz,” which plays at Baltimore Center Stage through June 25, 2017, is directed by Kwei-Armah, and is based on the novel by Toni Morrison. “Twisted Melodies” is written and performed by Kelvin Roston, Jr. and directed by Derrick Sanders. It is based on the life of 1970s soul singer and composer Donny Hathaway, and ran at Baltimore Center Stage March 17, 2017 through April 5, 2017.

Baltimore Center Stage’s 2017-2018 season is comprised of the following shows: “The Christians”; “Shakespeare in Love”; “Lookingglass Alice”; “Skeleton Crew”; and George Orwell’s “Animal Farm”. Another show, which has not yet been announced, will also be in included.

“The shows we are presenting are geared towards a wide variety of audiences,” he said.

Kwei-Armah is also an award-winning playwright. His piece “Marley”, played at Baltimore Center Stage in 2015. and drew sell-out audiences.

“Marley just played in Birmingham, England, and will transfer to a commercial run,” he said. That is the equivalent of Broadway.”

“I think we have reconnected to the community in a positive way,” he said. “Through the Mobile Unit, we take shows to disenfranchised areas and reach the homeless and other audiences. We also have discussions around our plays with the community. It’s all about facilitating conversations about issues that are important to the community.”