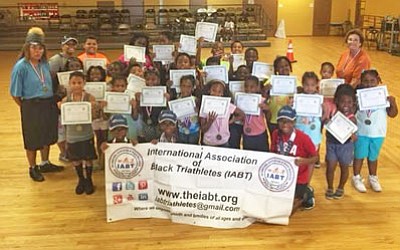 Organization officials note that childhood obesity is a growing problem in the United States with studies showing that American children, particularly those from economically distressed regions, often don’t have access to a proper diet or exercise regimen. 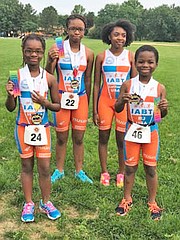 “The current obesity rates for high school students are 11.5 percent; in 10 to 17 year olds, 15.1 percent; and for two to four-year-olds who are WIC participants, 16.5 percent,” said Dr. Tekemia Dorsey, a nationally certified race director and executive director of the IABT. “These numbers remain on the rise, and looking at the [current] rates of adult obesity, the rates for youth will be much higher when they venture into adulthood.”

Further, Maryland has the 31st highest adult obesity rate in the nation, according to report, “The State of Obesity: Better Policies for a Healthier America,” which was released last year.

“Childhood obesity did not just seemingly become such a major problem, it has always been a major concern. Unless or until a person or an organization highlights it, it is simply viewed as another problem, although lives are impacted by it directly in communities and across the country,” Dr. Dorsey said.

While the fight against childhood obesity isn’t new, IABT counts as the first organization to battle the health disparity through multi-disciplined sports— triathlons, duathlons and Youth Aquathons— in Maryland and in Baltimore, according to Dr. Dorsey.

“National organizations such as USA Triathlon, which we are affiliated with, is also using multi-disciplined sports to fight the good fight against obesity and to make a difference in communities,” she said.

Formed in 2012, IABT started as a Facebook group where African-American athletes gathered to support one another through training, events, nutrition and other activities.

In 2014, a core group decided to make more of an effect beyond a social group, so they transitioned into an organization.

Over the last five years, IABT has helped more than 100,000 individuals.

“In January, 2016 we began cross training a group of Baltimore City youth as triathletes, teaching them how to swim, working with them in cycling and improving their run, while also working on strength and conditioning, and nutrition as athletes and individuals,” Dr. Dorsey said.

Two of those athletes were brothers new to the country, still considered immigrants. In their native home, Africa, they excelled at soccer and running but not much else.

“After two months of training, the eldest brother, Ismail, wanted to take part in his first duathlon event. The event was held in Hagerstown and he came in 1st place in his age group and qualified to go to National Duathlon Championships,” she said.

On June 25, 2017, the inaugural IABT Youth Triathlon, Duathlon & Splash N Dash Event for ages six to 15 will be held at Druid Hill Park with an eye toward combatting childhood obesity.

“Not every youth is going to play or even feel comfortable with mainstream sports such as football, basketball, softball, tennis or even track and field,” Dorsey said. “Most youth who are obese or lack a sense of self, choose not to be active, leading to poor health outcomes in many cases.”

The beauty of multi-disciplined sports is that they are universal to all, regardless of age, shape, size, ethnicity, socioeconomic status, religion, or academic level, Dorsey noted.

“We hope to demonstrate to youth and [their] parents that there are alternative ways to get healthy and active. They can do it as a family as well,” she said.

For more information about IABT or to register for the event, visit: www.active.com or www.theiabt.org.