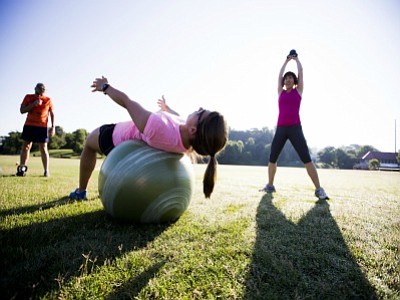 For some people, summer is the time to head indoors to exercise. But others welcome the heat as a way to sweat more and get a better workout. Turner

(CNN) — For some people, summer is the time to head indoors to exercise. But others welcome the heat as a way to sweat more and get a better workout.

Indeed, I've long regarded the sweatiness of my exercise sessions as a sign of how hard I was pushing myself. But it turns out I've been wrong: How much you sweat doesn't necessarily correlate with how intense your workout is or how many calories you burn.

When your body temperature rises, your eccrine glands secrete sweat, and the evaporation of moisture from your skin helps you cool off. Of course, sweating can occur for other reasons, such as stress or fear.

That type of sweat comes from the apocrine glands, which are located mainly in the underarm and groin.

How much we sweat during exercise is due to a number of factors, including gender (men tend to sweat more than women) and age (younger people sweat more than older people) as well as genetics, temperature and humidity.

Another contributor is fitness level. Surprisingly, fit people tend to sweat sooner during exercise and more copiously than those who are less fit.

Research suggests that as your fitness level improves, your body's heat-regulating system becomes more efficient, cooling you down faster and allowing you to work harder.

Don't be misled by the loss of a few pounds after a high-sweat workout. This is simply water weight that you gain back when you rehydrate and doesn't necessarily mean you've burned lots of calories.

On the flip side, don't assume that a low-sweat workout means you aren't working hard enough or burning enough calories. It could be that your sweat evaporates quickly because you're exercising in air-conditioning, near a fan or outdoors on a windy day. Or, unlike me, you simply may not sweat much.

Whatever the case, wearing clothing made of synthetic fabrics such as polyester or Lycra can help you feel less sweaty. These pull (or wick) sweat from your skin to outer layers of the clothes, where the moisture evaporates.

Cotton, on the other hand, absorbs moisture but doesn't promote evaporation. As a result, your shirt or other clothing can feel soaked and heavy after a workout.

A drawback of polyester is that it tends to stink more than cotton after exercise. In one study, researchers collected the sweaty shirts of 26 subjects after an hour of intensive spinning. The next day, trained sniffers determined that the polyester shirts smelled worse than the cotton ones. (It's unclear who exactly agreed to do this job or why.)

Micrococci, a type of bacteria that break down sweat and cause unpleasant odor, were found to grow only on the polyester garments. That's important because sweat itself is generally odor-free; it's the combination of sweat and certain bacteria that literally raises a stink.

You can find "odor-resistant" synthetic fabrics, which are treated with various antibacterial compounds. Among the most common is silver, typically applied in tiny amounts known as nanoparticles.

But some research suggests that silver-treated clothing may not work as well as promised to reduce bacteria and odor. What's more, a significant amount of the silver may come out in the wash, reducing the effectiveness of the garments and potentially harming the environment.

There are also concerns that exposing our skin to silver nanoparticles may pose a health risk, though there's no direct evidence for this.