HBCU Students "Discover The Unexpected" with the Black Press 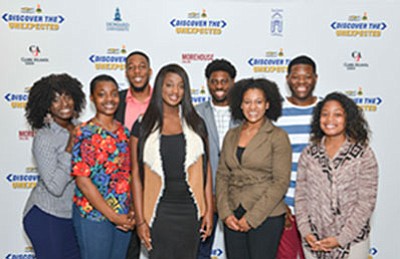 BALTIMORE (NNPA) — The National Newspaper Publishers Association (NNPA) kicked off the second year of the “Discover The Unexpected” (DTU) Journalism Fellowship program with an “Immersion” event in Detroit, Mich. Chevrolet, the sponsor of the program, hosted the student scholars and a handful of NNPA publishers and editors for an interactive experience designed to prepare the fellows for a summer working with the Black Press.

The trip commenced with a welcome ceremony at a repurposed firehouse that serves as the commercial studio of Ed Welburn, the former vice president of Global Design at General Motors (GM). Representatives from GM and the NNPA greeted the fellows. The all-new 2018 Chevrolet Equinox was parked at the entrance.

Chevrolet sent an all-new Equinox to each of the participating NNPA member publications for the DTU fellows to use for a month during the program.

After a joyous welcome from the program’s team, Dr. Benjamin F. Chavis, Jr., the president and CEO of the NNPA and Michelle Alexander, the diversity marketing manager for Chevrolet, delivered remarks. Serving as this year’s Road Trip Navigator, Jamilah Lemieux, the vice president of News and Men’s Programming for Interactive One’s, expressed the importance of Black media.

After Lemieux’s poignant remarks, the scholars were led outside of the firehouse where one bright red and three splashy orange Chevrolet Equinoxes awaited them. The DTU fellows in teams of two, accompanied by Chevrolet staffers and coordinators from the program, piled into the four SUVs ready to explore Detroit. Scavenger hunt clues rang clearly through the speakers of the Equinox and they were off to navigate the city. The clues led the teams to four, distinct locations: Dilla’s Delights, Detroit vs. Everybody, N’Namdi Center for Contemporary Art, and the Charles H. Wright Museum of African American History.

At each stop, the students interviewed the shop owners, clerks, curators, and museum guides, documenting their visits for their first assignments as DTU fellows. Burris said that speaking to the clerk at Detroit vs. Everybody, a boutique clothing store, was her favorite part of the scavenger hunt.

“It was obvious that Sade, the clerk, was very knowledgeable about what their brand means and how it is continuously uplifting the community and defying the odds,” said Burris, who will partner with Ayron Lewallen at The Carolinian this summer.

The scavenger hunt ended with a tour of the Charles H. Wright Museum of African American History. Ken Barrett, the chief diversity officer for GM, gave brief remarks about the importance of the program and the role of journalists in society.

The final day of the Detroit immersion event included an inspirational speech from Dr. Chavis at GM headquarters. The DTU fellows sat quietly around a conference room table, focused closely on his words, as he reminded them that they represented an emerging generation of journalists. Chavis also noted that this year marks the 190th anniversary of the Black Press in America.

“This is an opportunity not just to reaffirm [our] 190 year legacy, but to represent that legacy in new and more profound ways that match the challenges and opportunities we face in our communities,” Chavis said.

The DTU fellows were given the opportunity to meet with representatives from the NNPA member newspapers, where they will work this summer; Shalon Bell from The Atlanta Voice; Adria Jervay of The Carolinian, based in Raleigh, N.C.; David Baker of The Louisiana Weekly, based in New Orleans; and Kevin McNeir from The Washington Informer, based in Washington, D.C.

In these breakout sessions, the senior newspaper staffers shared their expectations with their new writers. Anxious to get started, the fellows asked questions and marveled at the history of the newspapers they were soon to join. There was a fresh excitement in the air after the student scholars connected with the editors and representatives from the NNPA member publications.

Next on the schedule, was a trip to the Content Studio, an organization within GM, that develops communications resources for the brand and improves how the company operates efficiently, strategically, and consistently within the public social web. There, the fellows were able to see how the marketing side of Chevrolet has expanded, technologically, by partnering with many different agencies in order to have a worldwide impact.

According to Alexander, the NNPA/DTU journalism program is an extension of the partnerships that Chevrolet holds in high esteem.

“As a brand, [Discover The Unexpected], ties into our philosophy of finding new roads and ingenuity,” Alexander said. “We, as a brand, feel like this is something important that we are committed to.”

As the trip came to an end, the DTU fellows shared final hugs and goodbyes. For some of them, the Detroit Immersion event was a life-changing experience; most of them had never been exposed to the Motor City’s rich history.

For all of them, one thing was true: “Discover The Unexpected” was far more than just a program. It’s a family.

“I was impressed by the immense love we have received from the whole General Motors staff, NNPA, and the fellows,” said Jordan Fisher, who will join Kelsey Jones at The Atlanta Voice. “I don’t take that for granted. It’s refreshing to see that and feel it.”