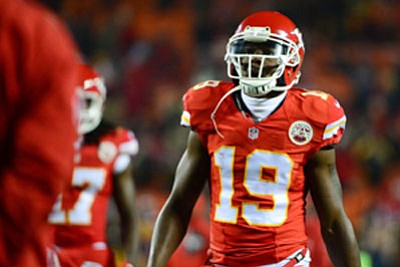 Jeremy Maclin walks back to the huddle after a play during a game from the 2016 Kansas City Chiefs season. The veteran wide receiver was recently signed by the Baltimore Ravens. Courtesy Photo/chiefs.com

BALTIMORE — The loss of Steve Smith Sr. to retirement and Kamar Aiken via free agency left the Baltimore Ravens with a void at wide receiver. Throw in the departure of Kyle Juszczyk along with an injury to Dennis Pitta, and now four of Joe Flacco's top targets will not be there this season.

Signing Maclin is a typical Ravens move. Newsome likes to acquire veteran receivers with something to prove. Past veterans such as Anquan Boldin, Derek Mason, and Smith Sr. provided a boost to the Ravens passing game.

Head coach John Harbaugh believes Maclin can do the same this year.

"He can have a big impact. He is a proven player; he knows how to play," Harbaugh said during his press conference at minicamp on Tuesday, June 13, 2017. "He knows how to be effective in this specific passing game, which is a big plus. I expect him to be a great player."

Entering his ninth NFL season, Maclin has posted 474 receptions for 6,395 yards and 46 touchdowns in 102 career games. Maclin was a 2009 first-round draft pick (No. 19 overall) by the Philadelphia Eagles.

Maclin signed with the Chiefs before the 2015 season and produced another solid season after being reunited with Andy Reid, who drafted him. In 2015, Maclin registered 87 receptions, 1,088 yards, and eight touchdowns.

Coming to Baltimore will provide another reunion for Maclin. Current Ravens offensive coordinator Marty Mornhinweg served in the same role with Philadelphia for the first four years of Maclin's career.

Now Mornhinweg will get to find ways to showcase Maclin once again. Quarterback Joe Flacco is from the Philadelphia area and already has a relationship with Maclin as a result. Flacco made sure he reached out to Maclin when he started his free agent tour.

"I made sure I texted him when he was up in Buffalo to come on down here and see what Baltimore is like," Flacco said after minicamp on Tuesday. "But I’ve run into Jeremy before in South Jersey when he was playing for Philly. He’s a great kid, and I think he’s going to like it around here."

A fresh environment is just what Maclin needs. He is coming off his least productive NFL season (44 rec, 536 yds, 2 TDs). Maclin missed two games last season, which undoubtedly contributed to the decline in production. He also had to deal with the death of one of his close friends in September.