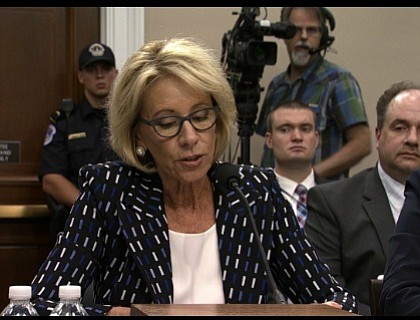 Education Secretary Betsy DeVos refused to say May 24th, 2017 whether she would deny federal funds to private schools that discriminate against admitting students based on sexuality, race or even special needs. POOL

(CNNMoney) — The Department of Education will halt two Obama-era rules that would have protected student borrowers and held for-profit colleges accountable.

The rules were set to take effect on July 1. But instead, the department said Wednesday that it will create committees to review and improve the rules.

"It's time to take a step back and make sure these rules achieve their purpose: helping harmed students," Education Secretary DeVos said in a statement.

One of the rules in question required for-profit colleges and certificate programs at non-profit colleges to show that the education their students receive leads to "gainful employment." If they fail to meet that standard, the schools' federal aid would be withheld.

The Borrower Defense to Repayment rule clarified how student borrowers who were defrauded or misled by their college can apply for loan forgiveness. It was created after the government received an unprecedented number of claims following the collapse of Corinthian Colleges.

This rule also created a fast-track way for students to apply for forgiveness in the event their college closed. That part of the rule was implemented early to help Corinthian students, specifically.

The department said it would keep its debt forgiveness promise to the 16,000 borrowers who currently have claims being processed.

Critics argue that these rules are too burdensome for colleges. A group representing many for-profit colleges in California has sued the Department of Education seeking to block the borrower defense rule from going into effect.

The plaintiff, The California Association of Private Postsecondary Schools, said the rule "threatens the existence" of many of its member institutions, according to the lawsuit.

A group of nine Attorneys General, all Democrats, filed a motion this week to intervene in the lawsuit. And some Democratic senators have urged DeVos to keep the rules in place.

The Department of Education said it will hold hearings on the rules in July.