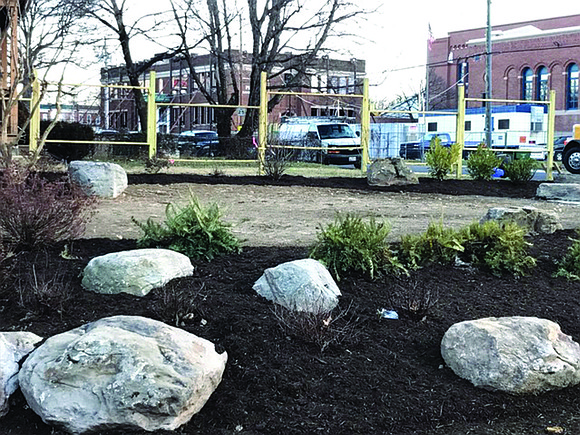 has partnered with Park Heights Renaissance to create a green space for children who attend school nearby.

Much of the work is taking place along Pimlico Road and Thorndale Avenue by AmeriCorps members, community residents, local artists and volunteer groups who work to create and maintain

“Civic Works’ Community Lot Team got started on the revitalization work in Park Heights around June of 2016, after being approached by the Baltimore Office of Sustainability,” said Jenny Katz,

On Saturday, March 25, Civic Works and others will participate in a community planting day, keeping in line with Civic Works’ Community Lot Team’s mission to transform vacant and abandoned lots in Baltimore City into community gardens and green spaces. Already, four garden spaces and art by local artist Adam Stab have also been installed.

The work is being done with the help of AmeriCorps members, community residents, local artists and volunteer groups who work to create and maintain thriving community spaces.

Additionally, Civic Works is helping to revitalize the 4700 block of the Park Heights corridor where vacant houses once stood.

“Instead of open dirt with nothing else, there’s been grass seeds planted and shrubs and a few trees already,” said AmeriCorps worker and longtime Park Heights resident Tony Dickens. “On the one side, we’ve put in a stone patio area where we will have some benches to sit and there will be some art work.”

“The Baltimore Office of Sustainability tapped Civic Works to help beautify the block once the houses were torn down,” Katz said. “This involved creating four separate garden areas, installing

stone patios shaped like flowers, and planting shrubs and other greenery. This block will serve as an illustration of what's possible for Park Heights. It will serve as a model for the revitalization of more blocks to come.”

by Innovations in Civic Participation, Civic Works has proven to be an effective organization lauded for doing a phenomenal job in serving local youth in need of a Corps experience and completing project work deemed invaluable to the surrounding communities.

The nonprofit provides Baltimore based job training that prepares program participants for employment, having placed 600 individuals in jobs, and providing 4,000 AmeriCorps members with service opportunities.

“On a fundamental level, neighborhood greening can help build property value and create a safe and clean space for children to play,” Katz said

The community work is vital for homeowners and other residents, allowing for a renewed sense of pride, Dickens said.

A lot of the homes that are falling apart [and] dilapidated in the area are eyesores. At the very least this is a morale booster for the neighborhood because we won’t be seeing so much of

“I’m pushing for our residents who live here to join in and get involved,” he said. “If they do, if they put in their sweat and hard work then they’ll probably be the ones who won’t hesitate to

speak up if someone comes in and tries to destroy this. They’ll be like me, grateful to Civic Works for coming in here, stepping up and contributing to our neighborhood.”

For more information about Civic Works, to volunteer or make a donation, visit: www.civicworks.com