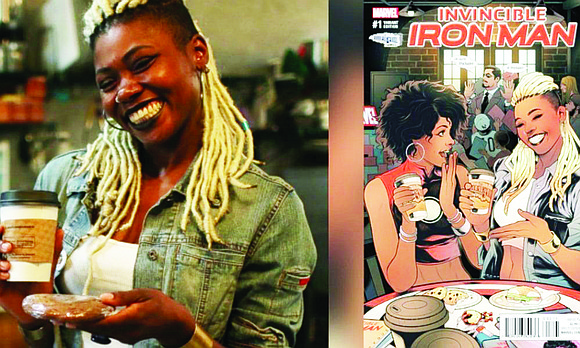 Ariell Johnson has created what she says is a “inclusive geek space” for residents and visitors of Philadelphia where she owns Amalgam Comics & Coffeehouse— the first black-owned comic bookstore on the East Coast.

She is known as the new hero of the Blerd community, turning a dream into a graphic adventure.

Coffeehouse— the first black-owned comic bookstore on the East Coast.

“The idea for Amalgam came from the loss of a community space that I enjoyed in college. There was a coffee shop across the street from my local comic shop, and I would hang out in the coffee shop for hours after buying my books each week,” said Johnson, who notes she never forgets her Baltimore area roots. “When the shop closed its doors, I was at a loss for that type of communal space. That is when the idea hit me— I thought, ‘wouldn’t it be cool if there was a place where you could buy your comics and hang out and read them too.’ That’s how it all started.”

When Allstate Insurance Company celebrated Black History last month, Johnson was selected to be a part of their annual digital, social and radio campaign, “Worth Telling.”

The campaign spotlights three African-Americans whom the company says are making a positive difference on society and inspiring others.

“These individuals are creating career opportunities for the underserved through barbering, raising awareness about diversity and representation through comics, and providing tools that

support the advancement of African- Americans through entrepreneurial opportunities,” said Georgina Flores, vice-president of product and marketing at Allstate. “Allstate is committed to creating, supporting and sponsoring programs that empower the African-American community.”

Since opening the comic bookstore in 2015, Johnson has been drawn on the cover of MARVEL’s Invincible Iron Man, and she hopes to inspire other comic book creators to give all fans representation by drawing African-Americans and women as the heroes and heroines of their stories.

“I was drawn on a variant cover of Invincible Iron Man #1 along with Tony Stark’s successor, Riri Williams back in November 2016. It was an awesome opportunity,” Johnson said.

“Occasionally publishers will approach retail comic stores about having store exclusive variants for hot new titles or milestone issues. We were approached by Marvel about doing a

variant and Randy Green, my Comic Book Jedi, was adamant about us doing it,” she said.

“The concept of the cover with myself and Riri sitting in Amalgam having a cup of coffee was all Randy's idea. I had no idea we would get such a huge response for the book, but we did.

“Our supporters see it as a historical event, the fact that I am the first black woman to own a comic shop on the East Coast, and Riri is a young black woman taking up the iconic mantle of Iron Man,” she said.

Johnson, who holds a Bachelor’s of Business Administration, said she is inspired by her family, specifically the women.

“I have a large family and I’m really close to them. Growing up, so many of my social activities revolved around family and family events and my grandmother is a big reason why our family is

so close,” she said.

Still, she says she was surprised by the Allstate honor.

“For me, I’m living in the reality of this thing that I have been dreaming about for over 12 years,” Johnson said. “It’s a personal accomplishment but I realize it’s also bigger than me. My mission with the store echoes what so many people have been feeling in the realm of ‘geekdom.’ People want to see themselves represented, they want characters they can identify with.”