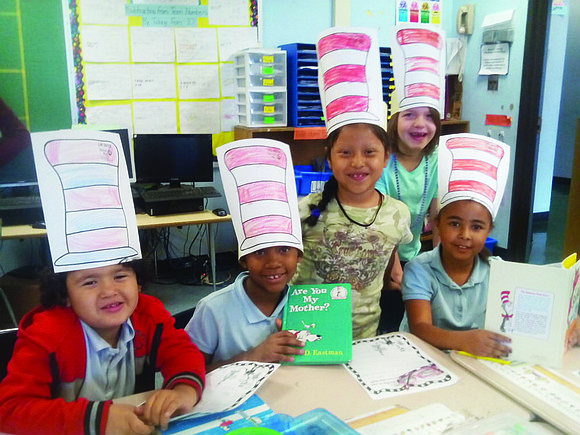 Volunteers from Women United and the United Way of Central Maryland donned Cat in the Hat apparel at 17 schools across central Maryland to celebrate Read Across America Day, also Dr. Seuss’s birthday with students on March 2, 2017.

to an eager class of first graders who then made their own Dr. Seuss hats and joined in the fun.

“This is one of the most enjoyable aspects of serving the community,” said Officer Velez as she read aloud to the class.

Members of the Baltimore City Police Department joined 150 volunteer readers from Morgan Stanley and other area companies, government agencies and non-profit organizations across the region to reinforce the joy of reading with elementary school students.

“Today was fun and I liked making my own hat,” Diego said while putting the finishing touches on his custom made Cat in the Hat replica.

The United Way of Central Maryland maintains a permanent presence at Maree G. Fanning through a new pilot program to identify at risk students before they fall through the cracks, according

“ United Way volunteers are placed in the school to identify at-risk children early in their school experience and help put them on the track to success,” Hogan said.

The program is also being piloted at Sandy Plains Elementary School in Dundalk, Maryland.

Women United is a dynamic group of more than 1,400 local women who have come together to lead the charge, inspire change and move the needle on the issues that are important to them in their community.

For more information about The United Way of Central Maryland’s Family Stability or the new pilot early intervention program for elementary schools, call: 410-547-8000 or visit: www.umcm.org.