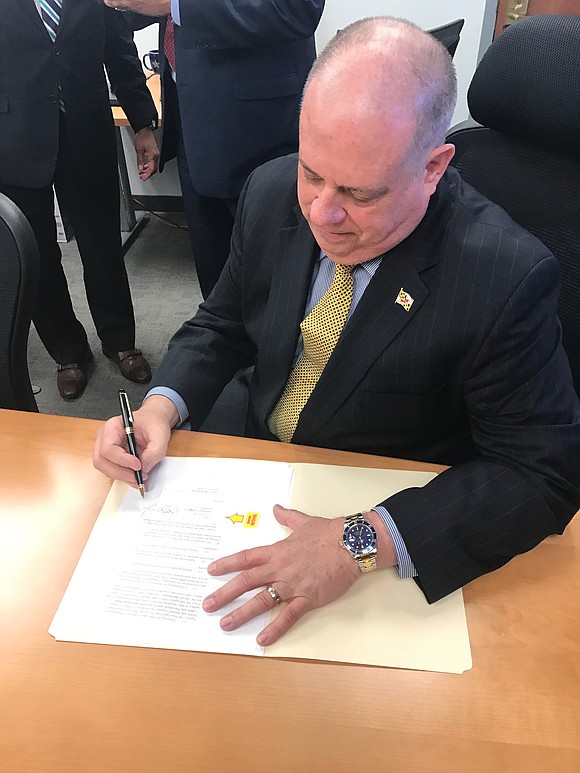 Governor Larry Hogan recently signed an executive order declaring a State of Emergency in response to the heroin, opioid, and fentanyl crisis ravaging communities in Maryland and across the country Courtesy Photo

Annapolis— Governor Larry Hogan recently signed an executive order declaring a State of Emergency in response to the heroin, opioid, and fentanyl crisis ravaging communities in Maryland and across the country.

tackle the evolving threat of heroin and opioid addiction. The initiative includes three important pieces of legislation: the Prescriber Limits Act of 2017, the Distribution of Opioids Resulting in Death Act, and the Overdose Prevention Act, as well as important budgetary actions, including $4 million in new funding to address the crisis.

This month, the Hogan-Rutherford administration also announced $50 million in new funding to address the crisis, as well as the appointment of the governor’s senior emergency management

advisor Clay Stamp to lead the state’s coordinated effort to combat the crisis.

“We need to treat this crisis the exact same way we would treat any other state emergency. With this continuing threat increasing at such an alarming rate, we must allow for rapid coordination with our state and local emergency teams,” said Governor Hogan.

The State of Emergency declaration is a result of the initial findings of the Opioid Operational Command Center (OOCC) established by the administration in January to facilitate greater collaboration among state agencies, including health and human services, education, and public safety entities.

The OOCC’s work made it clear that the state needed greater flexibility to activate emergency teams in jurisdictions across the state and engage local communities.

The governor’s executive order authorizes emergency powers to state and local emergency management officials, enabling them to fast-track coordination among state and local agencies and community organizations, including private sector and nonprofit entities.

“The fact of the matter is that people all across Maryland, and across our country, are looking for answers when it comes to this heroin and opioid epidemic. Too many families know the devastation caused by this crisis and the death toll is climbing,” said Lt. Governor Rutherford. “Ultimately, this is about saving lives, and it will take all of us working together in a collaborative,holistic approach to achieve that.”

On the horizon is a supplemental budget of $50 million in new funding over a five-year period to support Maryland’s prevention, recovery, and enforcement efforts. Rather than locking us into inflexible spending through statute, the governor’s plan will provide flexibility to public health and safety professionals in order to address this emergency.

Clay Stamp, Hogan’s senior advisor for emergency management, has been tasked with overseeing this unfoldment of this legislation.

“As an emergency management professional, it gives me great honor to have been chosen to lead such an important effort, and to serve next to the many dedicated and highly capable people who are working to eliminate the impact this crisis is having on the people of Maryland,” said Stamp.