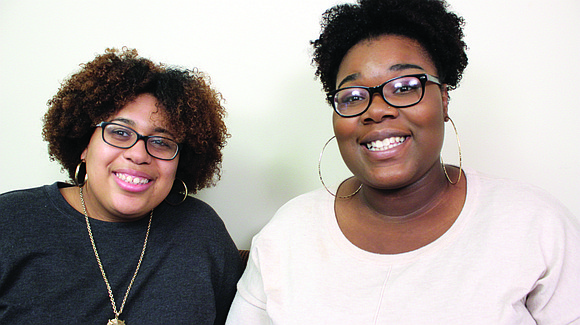 “Khadijah and I are both major supporters of the natural hair movement. There is not a day that goes by where we don’t have a conversation about our natural hair whether it’s giving each other tips or having a conversation about the latest news about natural hair,” Chadwick said. “Therefore, we felt that it was important to bring something new to our campus to support the other naturals that are out there like us. So, we started to plan this event, while sharing our vision with different people on campus, and it started to all come together.”

Poston says the conference will address their notion that the recent natural hair movement that has swept the nation isn’t just a coincidence.

“I just think over the past several decades, people have slowly started getting away from seeing straight hair as a necessity and a norm,” Poston said. “We’re just glad we can provide the

tools and knowledge to the people at McDaniel who may not be as knowledgeable about black hair in general.”

Sponsored by McDaniel’s English Department and the Office of Student Diversity and Inclusion, the conference will include natural hair discussions with popular YouTube bloggers; classes; and

Natural hair swag bags with free natural product samples and a raffle will also help highlight the conference, which is scheduled from 9:30 a.m. to 3:30 p.m.

Additionally, natural hair psychologist Afiya Mbilshaka, a professor at Howard University, has committed to attend the conference, the students said.

“I often see stories and articles about women with natural hair who have a difficult time in the workplace,” Chadwick said. “Personally, I am fortunate not to have had any negative experiences when it comes to my natural hair and my work. However, it is unfortunate that something like hair can have an effect on someone’s work life.”

Poston says that it wasn’t until recently that she decided to go natural and she has been pleased with the response. “Since I haven’t necessarily been in the professional workforce yet myself, I haven’t encountered too many negative experiences. I mostly just get compliments on my hair,” she said, arguing against the thought that women who wear their hair natural are making a

statement of some form.

“It shows how natural hair can be multidimensional. It’s important to understand that deciding to wear your natural hair is a choice,” Chadwick said.

Poston says she views those wearing their hair natural as their way of embracing the hair that God has given them. “It’s what naturally grows out of your head so, I don’t think wearing your hair naturally is a statement. It’s similar to someone wearing a weave or relaxed hair, those aren’t statements, it’s just what they like and what works for them,” she said.