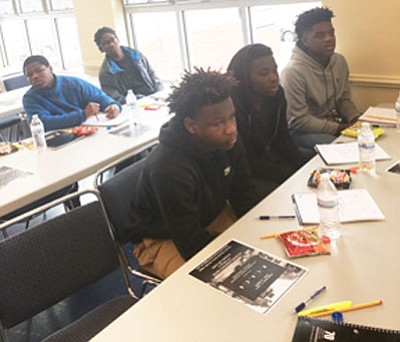 Young men learn about apprenticeships and self-sufficiency during a workshop at the new program called B.L.A.C.K. (Becoming Leaders Acquiring Critical Knowledge) founded by Annapolis native Deonte Ward. The 27-year-old is actively taking steps to make a difference in the community by making a positive impact in the lives of young, black men. Courtesy Photo/B.L.A.C.K.

ANNAPOLIS — Deonte Ward, 27, is an Annapolis resident who acknowledges the importance of helping young black men on a positive path.

Ward, an electrician and entrepreneur founded B.L.A.C.K. (Becoming Leaders Acquiring Critical Knowledge) to take action to combat challenges that many black males face by filling voids in the community with innovative direction.

Youth who would like to learn from role models, to change the direction of their lives or learn some basic life skills, now have a new place to turn.

“I pretty much organize everything, and then I reach out to a group of friends who are all entrepreneurs,” Ward said. “I just want to see young black men succeed.”

He began offering a free opportunity for African-American males, ages 11-21, to acquire additional skills and training in a workshop environment last month.

Teenage males and young men are invited to participate in the second workshop at the Pip Moyer Community Center located at 273 Hilltop Lane in Annapolis from 9 a. m. to noon on Saturday, March 18, 2017. 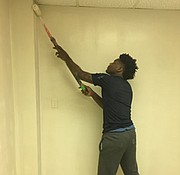 Tnaejah Watts of Annapolis learns how to paint at the first B.L.A.C.K. program event. Even before establishing the new program, Ward was a mentor to the 17-year-old who attends Annapolis High School.

Ward initially addressed topics such as anger management and trust building in the first workshop and will include credit, banking and financial planning and retirement topics in future workshops. Skill-building and hands-on trades will also be offered.

Ward says that he will continue to share things that he has learned on his journey. Mobilizing others seems to be one of his skills. Ward explained that he reaches out to friends who are entrepreneurs and participants of Black Wall Street Annapolis LLC (BWSA) to help with B.LA.C.K. Ward has brought BWSA to life in Annapolis, while bringing young, black entrepreneurs together.

His latest efforts to address specific needs of young men and boys are partially funded through BWSA. Ward aspires to offer a variety of topics. His commitment to help youth continues to unfold.

The Annapolis native is no stranger to volunteering and encouraging young Annapolitans. Ward founded a prior incentive youth program in 2007 called KNECTED (Keeping Energy Centered Together Endless Dreams) Kids. By getting good grades, young people would earn a trip to someplace special.

Ward still works with elementary and middle school students in Annapolis who live in Newtowne 20, a public housing community. He helps them determine possible career choices and focus on things necessary to help them to become successful.

Ward believes that his positive attitude and the words of encouragement he received from John Downs III when he was growing up in Newtowne 20, enabled him to do well in school and to ultimately graduate.

Because of the help that he received from Downs, he was inspired to pay it forward, and considers it his mission to help young people.

Even before establishing the new program, Ward was a mentor to 17-year-old Tnaejah Watts who attends Annapolis High School.

Watts, who lives in the same community as Ward remarked that the entrepreneur began mentoring him when he was younger and he is grateful for the opportunities to learn simple yet important jewels which have already left an big impression on him.

“It really motivated me a lot about a lot of things. He (Ward) taught me how to tie a tie. It’s a lot of [things like] that he teaches me,” said Watts when talking about the reason that other boys and young men should participate in B.L.A.C.K. “You can learn a lot of different stuff in this world.”

An additional free workshop will be held on Saturday, March 25, 2017. To register or for more information, email: blackwallstreetannapolis@gmail.com or call: 443-851-1920.