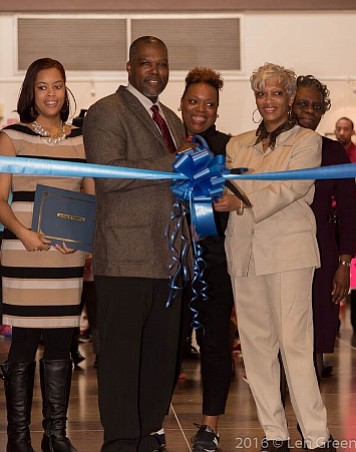 Growing up in Chicago, Dr. Marlene Jackson and her seven siblings did not have many opportunities to participate in things that would inspire them to reach their goals. Being raised in a single-parent household, Jackson’s family did not have a lot of money, an upbringing that intersects with this Columbia, Md. native’s passion to help today’s youth explore opportunities she lacked when she was growing up.

Along with her daughter Ashley Jackson, a counselor for Baltimore County Schools, Jackson founded Le’ Chic

Academy Foundation. The mother and daughter’s venture started out as a girl’s empowerment program for ages 5-18. The idea of supporting business-minded children evolved into another facet called “Biz Kidz.”

An inaugural Biz Kidz Ribbon-Cutting Award Ceremony/Shark Tank Competition was held on November 5, 2016 to build kids’ business awareness, support girls and boys who wanted to explore how to make money, and observe leaders within the community.

“Biz Kidz” continues to expand. An upcoming television series featuring young entrepreneurs that will be shown

on a public access channel is in the development stage.

“I want to promote these kids [and] to inspire them, [and] take their artistic goals and skills, and show them to take whatever is on the inside of them and make money from it,” Marlene Jackson said. “When I was coming up, we were told to get a good government job and work for someone. I want to do just the

opposite with these kids who are coming up, because they have the technology, they have social media, they have things that we didn’t have back in the day. And I want to show them that, ‘Yeah, you can work for someone, but guess what? You can work for yourself and it’s okay. You don’t have to get a job with someone else, or you can do that and still do your own thing with your own creative abilities.”

“And what we are going to do, [is] to have workshops for parents and the kids, so that they can go to any workshop that they want to either together or separately,” Marlene Jackson said, referringto events scheduled for June 3. “That Sunday (June 4) is going to be very beneficial because the kids are going to

laptops. And later that day, we’re going to have a fashion show, where they can show their poise.”

Le’ Chic Academy Foundation is a member of the Howard County Chamber of Commerce. Leonardo McClarty,

“Adult business owners give value by being with other adult business owners by building a network learning from each other. I think the same things go for kids. We see it every day, even in he classroom, whether it’s discussing English Studies or Social Studies or Science— there are opportunities where kids learn from one another,” McClarty said. “I think the second is the fact that they have an opportunity to hear directly

from business owners or business representatives about the benefits of entrepreneurship and business ownership.They’re able to learn early on what you have to do to be successful.”

Online registration for youth to participate as vendors is currently open for “Biz Kidz.” Please visit www.lechicacademy.com for more information