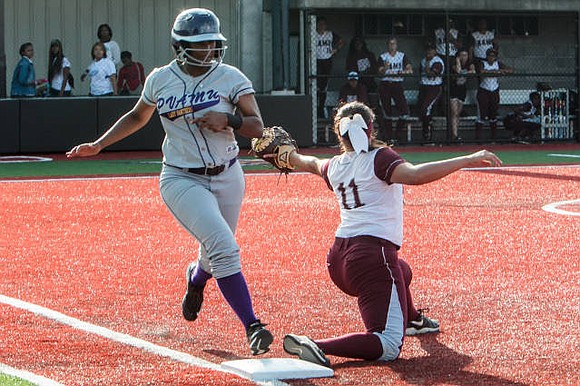 PRAIRIE VIEW, Texas - Prairie View A&M swept Jarvis Christian in Monday double-header action by scores of 8-0 and 8-7. It marks the fourth and fifth-straight victory for the Lady Panthers (8-16).

Game one saw PVAMU's Ashley Higgins throw a no-hitter, as she fanned two hitters in the workman-like effort. Prairie View's bats took care of the rest, as a six-run first inning propelled the Panthers to the win. Kylar Ward-Flowers hit a two-run double, and Shelby Williams and Alyssa Garcia each scored a run and drove in another. Garcia stole home in the second inning to put PVAMU ahead 8-0, ultimately the final margin.

The Lady Panthers needed late-inning magic in game two, as Prairie View was no-hit for the first five innings of the game while JCC put up five runs in that span. Despite this, PVAMU scrapped together three runs -- Shelby Williams scored on a wild pitch after stealing second and third to get PVAMU on the board, and after a walk and consecutive hit batters loaded the bases, a RBI groundout and a RBI sac fly kept the Lady Panthers in the game.

In the sixth, JCC got two unearned runs to go ahead 7-3, but Prairie View's bats finally broke through in the bottom of the frame as Kiara Ross hit a two-run triple and Williams -- who stole four bases in the game -- hit a RBI single.

In the seventh, Laurisa Hernandez won it with a walk-off two-run shot. Taylor Drury managed the win, allowed three hits and no earned runs in 4.2 innings.