Five Guys Named Moe to be Performed at Hopkins 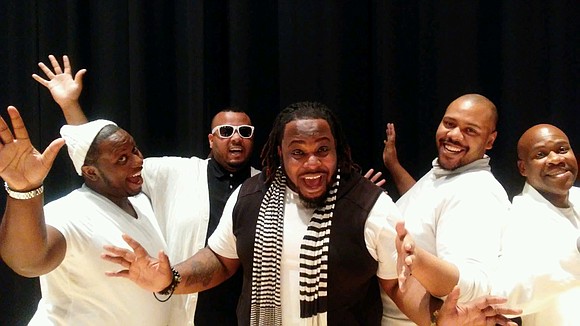 at 720 Rutland Avenue in Baltimore. Five Guys Named Moe is being presented through special arrangements with Cameron Macintosh and Music Theatre International (MTI). The play is the

Theatrical portion of UV’s 23rd Anniversary Celebration, which also includes a May concert.

Five Guys Named Moe is a musical with a book by Clarke Peters and lyrics and music by Louis Jordan and others. The play is based on an earlier musical short of the same name by Louis Jordan

from 1943. It had its UK debut in 1990 at the Theatre Royal Stratford East, running for over four years in the West End, and then premiering on Broadway in 1992. It was revived in 2010 at the Edinburgh Festival, starring Peters himself, and returned later in 2010 to the theatre in which it originally premiered. The musical won the “Laurence Olivier Award” for Best Entertainment.

The play’s storyline is centered on Nomax (Carltaise Ransom), who has no money, and whose girlfriend has left him. He finds Big Moe (David Bell), Four- Eyed Moe (Avery Pearsall), Eat Moe

(Arnold Harper), No Moe (Christopher Lay), and Lil’ Moe (Aaron Rowell) emerging from his 1930s-style radio to comfort him.

They sing the hit songs of songwriter and saxophonist Louis Jordan, whose new slant on jazz paved the way for rock and roll in the 1950s. The UV performance will also include background

Dr. Gregory Wm. Branch is Stage Director of the production, while Howard “Buddy” Lakins, Jr. is the Musical Director. Terrell Kellam is the Choreographer. On May 21, 2017 at 5 p.m., UV will present the Musical portion of its 23rd Anniversary Celebration, with a concert featuring special guest performers Eric Waddell & The Abundant Life Singers.

“We are excited to present these dynamic performances to celebrate the 23rd Anniversary of Unified Voices of Johns Hopkins,” said Dr. Branch, who also serves as Executive Director of UV. “We are asking everyone to come out and support Five Guys Named Moe and our May concert as UV celebrates 23 years of spreading hope, health, and healing through harmony at Hopkins. People can expect to laugh, cry, and most of all, to be uplifted as Hopkins turns into the Hippodrome.”

Unified Voices of Johns Hopkins is a gospel choir that consists of a diverse group of individuals with different personalities, lifestyles, and backgrounds working together to bridge the gap between the medical institution and the historic East Baltimore community and beyond.