Helping our Veterans Back to Work 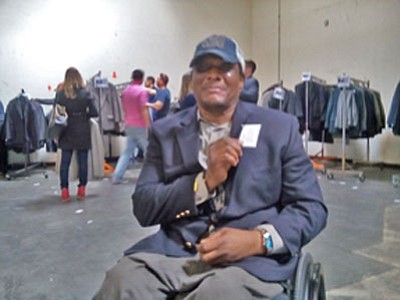 Joseph Quarles, who was honorably discharged from the U.S. Navy models a new suit jacket that he selected at the "Marching Our Veterans Back to Work” event on Saturday, March 18, 2017 at Cromwell Business Park in Glen Burnie. Deborah Bailey

BALTIMORE — Joseph Quarles was among the first in line at the “Marching Our Veterans Back to Work” event on Saturday, March 18, 2017 at Cromwell Business Park in Glen Burnie, Md. More than 800 suits were provided to veterans in the Fort Meade area.

The honorably discharged United States Seaman (US Navy) didn’t know his suit size but knew that he was in the middle of starting a new chapter in his life, as a returning student at the University of Baltimore.

“I love my country and I love helping veterans,” said Quarles. “I came from an organization called McVET. I’m in the job market and I thought I’d come out and take advantage of meeting new people and getting a new suit.”

Helping give veterans a hand up and enabling them to confidently make an entrance at their next job interview is exactly what Farmers Insurance had in mind when they imagined what a new suit could do to bolster a veteran looking for work in the civilian marketplace.

Then, Farmers stumbled upon Captain Pete Smith, United States Marine Corps Reserve, (Fort Meade) who is also a city councilman in Anne Arundel County (D-District 1). From that run-in, a unique idea was born for the veterans in the Fort Meade, Anne Arundel County, Howard County and the Baltimore area.

“Farmers launched a program nationally with the goal of collecting 50,000 suits and [other] pieces of business attire for our transitioning military. We’ve actually exceeded that goal and have collected 70,000 pieces nationwide,” said Carly Kraft from Farmers Insurance.

A colleague of Kraft’s connected with Smith who saw the possibilities for veterans who lived near Fort Meade and surrounding areas.

“When he found out that we had suits to donate, he thought about putting together the event, and here we are,” Kraft said.

“We decided to make this a community event. Once Farmers told us how many suits they had to give, I was like, ‘wow we’re really going to need all the help we can get,’” said Captain Smith.

“I reached [out] to my extended network and brought these people together to see if we could make this work,” Smith said. “All of my different lives— on the City Council, as marine captain and as budget officer at Fort Meade came together to make this work.”

Howard County Councilman Calvin Ball said that he was excited to see the level of inter-governmental collaboration between Anne Arundel and Howard counties as well as the corporate response to serving veterans.

Pete and I often talk about ways that we can better serve our community, and when he brought this idea to me, I was so excited to see how we could serve our veterans,” Ball said. “We thought this was going to be an event for about 250 veterans but we were amazed to get a response from close to 800 veterans.”

Farmers Insurance has a longstanding commitment to the military. The company was founded by two World War I veterans and launched Suits for Soldiers nationwide in October 2016. ZIPS Dry Cleaners laundered the items provided to veterans at the event free of charge. St. Johns Properties also served as a major corporate donor for the event.