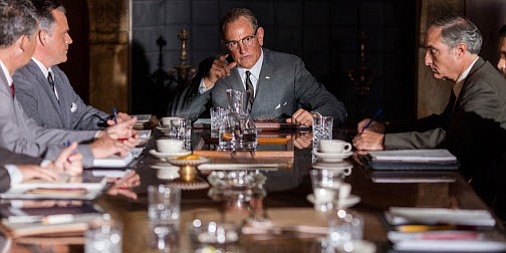 LBJ is the story of U.S. President Lyndon Baines Johnson from his young days in West Texas to the White House. Opening night starts with a screening of LBJ followed by a Q&A with director Rob Reiner, screenwriter Joey Hartstone, actor Jeffrey Donovan, and producers Matthew George, Tim White, and Trevor White.

LBJ, the Rob Reiner-directed drama chronicling the life and times of the legendary and controversial Texan who would inherit the Presidency at one of the most fraught moments in American history, will be the Annapolis Film Festival’s Opening Night film Thursday, March 30 at Maryland Hall for the Creative Arts.

relevance is slated for theatrical release this summer. LBJ shows Johnson confronting the challenge of leading a nation still grieving its beloved President Kennedy, even as he grapples with urgent calls for social justice led by Martin Luther King Jr. Shrewd by nature even when he was appallingly coarse, Johnson emerges in Harrelson's full-blooded characterization as a man

willing to drive through landmark legislation partly on principle and largely on guts. Producers of LBJ include Reiner, Matthew George, Liz Glotzer, and Annapolis natives Trevor and Tim White.

Now in its fifth year, the Annapolis Film Festival (AFF) brings independent cinema to the Chesapeake with an extraordinary lineup of narrative, short, and documentary films. The Festival

takes place March 30th to April 2nd, 2017 in downtown Annapolis. More than 70 of the world’s smartest and edgiest just-released films will be screened across the four days of the Festival, kicking off with the Opening Night Film at Maryland Hall for the Creative Arts.

The Opening Night screening is followed by an After Party hosted through a partnership with the Boys and Girls Club of Annapolis and Anne Arundel County. Film screening venues include

and Annapolis Elementary School on Green Street. Panels will be held at the O’Callaghan Annapolis Hotel. Moviegoers can stroll through historic Annapolis between venues or catch the

AFF-exclusive City Circulator trolley, a free ride when an AFF pass or ticket is presented.

events, and the fine arts.

An array of Shakespeare-inspired short film programs features titles such as All the World’s A Stage and Farewell, Fair Cruelty. There is also a Local Focus showcase of locally-produced short

films and a program of top-tier student films. The Juried Shorts competition returns to the weekend lineup.

“Coffee Talks with...” is an intimate opportunity for VIP passholders to hear behind-the-scenes talk about directing, acting, and producing. Hosted at Chesapeake Brewing Company with beverages provided by Baltimore Coffee and Tea Co., these informal morning chats take place 9-10 am, Friday, Saturday, and Sunday.

Tickets cost from $12.50 for a single screening or panel to $125 for a general festival pass. The pass includes the Opening Night Film and After Party and unlimited films and panels for four days. Student and senior tickets are $10. Day Passes are $40 each and Student Passes are $50.00 for all four days.

Passes can be obtained from www.annapolisfilmfestival.com now with tickets to individual films available for purchase on March 1, 2017.