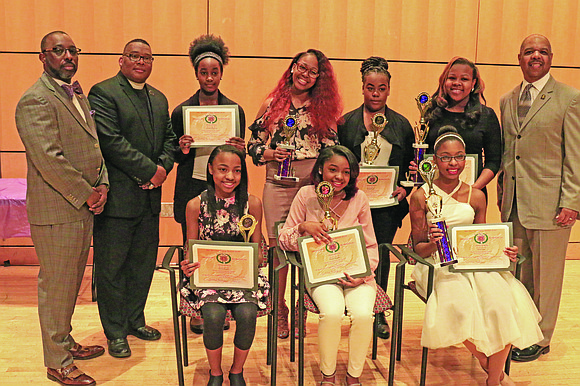 The Talent Hunt demonstration was created in 1945 from the Fraternity’s Sixth District (North Carolina and South Carolina), and is one of the international projects of the Omega Psi Phi Fraternity. Pi Omega has participated in this event for 60 years, and many of our talented high school youths have benefited from this project through all-expenses paid trips, U.S. Savings Bonds, trophies, certificates, print and televised media exposure.

Students from public and private schools in Baltimore City, Baltimore County and the surrounding area were participants in this year’s competition. The winners were as follows:

Students from public and private schools in Baltimore City, Baltimore County and the surrounding area were participants in this year’s competition. The winners were as follows:

Jasmine Oyefusi will represent Pi Omega Chapter at the District Talent Hunt Competition, which will be held during the 69th Second District Conference at the Westchester Hilton Hotel in

Autumn Hancock from Sudbrook Magnet School played a musical selection on the trumpet at the 61st Annual Talent Hunt. Hancock is considered a “Futures Performer” since she is not old

enough to formally participate in the program. She did an excellent job and was invited to perform again next year.

The Talent Hunt competition was renamed in 2011 following the death of Bro. O’Neal who was the Talent Hunt Chairman for over 20 years.

Bro. John Berkley served as the chairperson for the 61st Annual Bro. Kelvin J. O’Neal Talent Hunt. Bro. Allen Taylor once again did an outstanding job as MC for this event. Special thanks were

extended to the Pi Omega Foundation for providing the funding for this year’s competition.