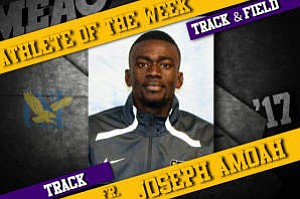 Amoah (Fr., Greater Accra, Ghana) won the 200-meter dash, at the Weems Baskin Invitational, with a time of 20.48 seconds. His time currently leads the MEAC and ranks third nationally. Amoah also finished 10th in the 400 (48.19).

White (So., Gaithersburg, Md.) ran the fastest time in the MEAC this season in the 100-meter dash with a time of 11.84 seconds, at the Raleigh Relays. Her finish in the event earned her a second-place finish. White also took second place in the 200, with a time of 24.46 seconds and currently ranks second in the MEAC.

Tiller (Sr., Tampa, Fla.) took first place, at the Hurricane Collegiate Invitational, in the triple jump with a distance of 15.98 meters (52-5.25 feet). He holds the top jump in the nation and MEAC as a result. Tiller also competed in the javelin throw (43.19m) and the high jump (1.90m), placing sixth in both events.

Sirmon (Sr., Fort Myers, Fla.) set a new personal record in the shot put at the Hurricane Collegiate Invitational. Her distance of 15.22 meters earned her third place at the meet. Sirmon currently ranks 34th nationally and first in the MEAC.

Daniel Kiptoo (B-CU) registered a fourth-place finish in the 3,000 with a time of 8:49.65, at the Hurricane Collegiate Invitational.

Kristen Deacon (CSU) placed second in the discus throw with a distance of 39.64 meters, at the Weems Baskin Invitational.

Sierra Adams (MDES) broke the school record in the hammer throw, at the UTEP Springtime Meet, with a distance of 43.60 meters.

Joshua Dacres (MDES) qualified for the MEAC Outdoor Track and Field Championship and set a personal record in the 100-meter dash (10.78).

Lenneisha Gilbert (MDES) earned qualification to the ECAC and MEAC Outdoor Championships after running the 400 in 55.85 seconds.

Taejah Robertson (NSU) clocked a season-best time in the 100-meter hurdles (14.20) to win the event.

Garth Warner (NSU) recorded a first-place finish, at the Fred Hardy Invitational, in the high jump with a leap of 2.00 meters.

LaRon James (SSU) set a new school record in the long jump with a distance of 7.43 meters.

Tyneshai Quarterman (SSU) recorded the third-fastest time in the MEAC, with a time of 55.62 in the 400.