Baltimore’s own LABBODIES will Shine at Light City 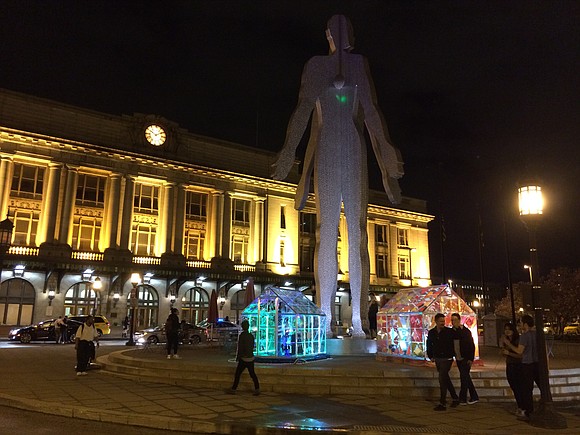 LABBODIES is a performance art laboratory based in Baltimore, Maryland, that provides a format for artists working in the arena of performance art to exhibit their work. LABBODIES will be among the artists whose light art installations will ‘shine’ during this year’s Light City festival, which returns to Baltimore’s Inner Harbor Friday, March 31, 2017 through Saturday, April 8, 2017.

Light City is sponsored by The Baltimore Office of Promotion & The Arts (BOPA), and is a free public festival that redefines what is possible in the public realm by transforming Baltimore into an

LABBODIES will present Light Happenings II, a site-specific installation and performance program by lead artists Hoesy Corona and Ada Pinkston, who are also LABBODIES founding co-directors. The project examines devastating moments in history and their relationship to contemporary acts of violence in the United States.

“Large-scale art projects often solicit proposals from individuals or teams that already have a history of working in similar capacities,” said Corona. “We are elated, in our short careers, to have

the opportunity to carry out such an ambitious commission. It is the most significant one for us so far, and we hope to create a path toward the sustainable production of future large-scale projects.”

According to Corona and Pinkston, Light Happenings II takes into account the complex history and public art found on and around the installation site. Particularly considering the Civil War trail and the 9/11 World Trade Center Memorial, as well as acknowledging the role that the Inner Harbor port served in the transatlantic slave trade— where “between 1815 and 1860, traders in Baltimore made the port one of the leading disembarkation points for ships carrying slaves to New Orleans and other ports in the deep South”.

“In the face of such earthly horrors, we ask the question: What Gives You Light?” said Corona and Pinkston.

“Baltimore has a very rich cultural history and contemporary art scene,” said Corona. “It combines affordable studio spaces with the very hard work of local arts organizers, many of whom are also artists. They take on roles missing from the creative ecosystem, often as curators, directors, gallerists, publicists, journalists and other generalists. We are particularly interested in the dynamic work being produced by artists and organizers of color, as well as women artists”. Pinkston added, “Baltimore’s cultural scene is incredibly unique and vibrant.

Even though there are silos, extreme segregation, and gentrification, the city and the artistic community are resilient and refuse to be ignored.”

Corona and Hoesy founded LABBODIES in January 2014 and have since produced more than 29 original events, ranging from public commission, solo/group gallery shows to museum performance events. Ashley Dehoyos recently joined the team as a program manager.

LABBODIES has also been commissioned by The Walters Art Museum, Station North Arts and Entertainment District, Art in Odd Places located in Orlando,FL and several others.

“Large scale events such as Light City and Artscape give many local artists in the city opportunities to work on temporary public art commissions,” said Pinkston. “Through Light Happenings

Part II, we have been able to hire and collaborate with many artists outside of our network. Light City also positions Baltimore’s artists in an international conversation around contemporary art and technology.”