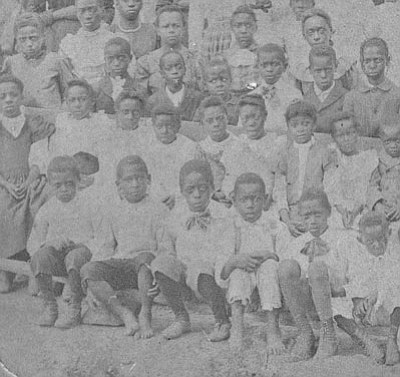 Hosanna School was built in 1867 on land owned by James Paca, the son of Cupid Paca, a free African-American who bought 50 acres of land from Berkley to Darlington, areas in Harford County. Students at Hosanna School in 1894 gather for a photo. Courtesy Photo/Hosanna School MuseumA

BALTIMORE — It was nearly 40 years ago when Christine Tolbert was approached by the president of the Harford County Historical Society for information regarding the history of the Hosanna School, a historic institution for African-Americans in Darlington, Md.

“I met with the Society to discuss the little I knew and after that meeting I began to question my maternal grandmother and other relatives and learned that it was the first public school built for the black community in 1867,” said Tolbert, a board member of the Hosanna School. 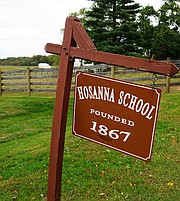 A simple sign marks the location of Hosanna School Museum in Darlington. Hosanna is now a living schoolhouse museum, which attracts visitors from all over the country.

Hosanna School Museum is a two-story structure that was built in 1867 by the Freedmen's Bureau.

After interviewing some of the neighborhood elders about the school, Tolbert said she was encouraged to explore the possibility of restoring the building, which was in great distress after being destroyed by Hurricane Hazel.

By 1983, with the help of Maryland Delegate Barbara Kreamer, the restoration received its first bond bill of $50,000.

For Tolbert, who attended what is now known as the Hosanna School Museum as a child from first through fifth grade and would later serve as its executive director, the joy of restoring the historic building will forever be remembered as officials prepare to celebrate the 150th anniversary of Hosanna on Friday, April 7, 2017.

“What I find compelling is the opportunity for younger people to experience a living history. They’re able to hear the stories, see, and touch and feel what schools in rural America looked like; to learn about the times when black people were denied an education equal to their white counterparts,” Tolbert said.

The first Freedmen’s Bureau school in Harford County, Hosanna will celebrate its anniversary with a banquet and a keynote address by Dr. Freeman Hrabowski, president of UMBC.

Hosanna is a living schoolhouse museum, which attracts visitors from all over the country. Housed inside the two-story building with two rooms on each floor, the museum hosts various events including living history presentations in the schoolroom.

Also, known as the Berkley School, Hosanna was built in 1867 on land owned by James Paca, the son of Cupid Paca, a free African-American who bought 50 acres of land from Berkley to Darlington.

It was used as a school, community, meeting place and church and remained active as a schoolhouse for African-American children until 1945.

Significant restoration of the building began in 1983, and the second floor was added in 2005, returning it to its original two-story structure.

“African-Americans from or associated with Harford County were involved in significant events that had national impact. But these stories are not well known,” said Iris Leigh Barnes, the school’s current executive director.

“One of my personal missions is to seek out these stories and ensure that they are included in the national narrative,” Barnes said, noting the Supreme Court Case of Prigg v. Pennsylvania, the Christiana Resistance, and the desegregation of restaurants and public accommodations along Route 40 in Maryland.

“What is important to me is that the public learns about the history of the school, and by extension life in Harford County in the context of emancipation, reconstruction and Jim Crow and how regardless of the social and political obstacles faced by the students that attended the school-the families that supported them-and the church that sustained them-they persevered,” added Board Member Sharoll Love.

“Too little is taught in our schools about history in general and African-American History, in particular,” Love said.

In addition, the banquet will feature a sit-down dinner, live entertainment and a book signing by Hrabowski.

“We are honored to have Dr. Hrabowski as the keynote speaker. His speaking is significant because in the same way the first teachers of Hosanna School were committed to providing education and changing lives in untold ways for African-Americans— committed sometimes to the point of putting their lives on the line— Dr. Hrabowski is equally committed to providing educational opportunities for today’s black youth, particularly males through STEM programs,” Barnes said.

Banquet tickets are $60 and are available online at: www.hosannaschoolmuseum.org. Proceeds are earmarked for the continued preservation of Hosanna School Museum and to support interpretative and educational programming.