There is a new Carr in the Ravens garage 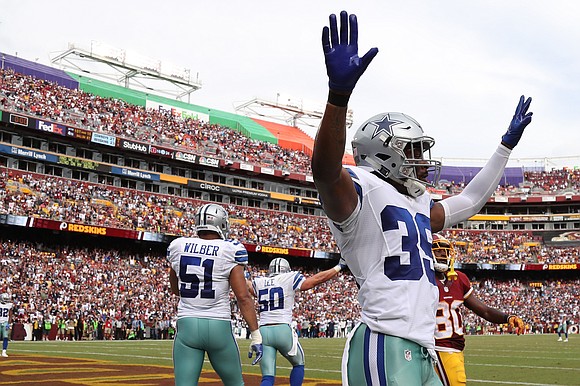 Cowboys cornerback Brandon Carr celebrates after an incomplete pass against the Redskins during the 2016 season. NFL.com

The Baltimore Ravens want to improve their pass defense even though the team was ranked ninth in the NFL, giving up 232.8 passing yards per game. The team released Sharece Wright and has signed veteran cornerback Brandon Carr to pair up with Jimmy Smith and Tavon Young for the top three corner spots.

Carr, a former member of the Dallas Cowboys and Kansas City Chiefs has not missed a game in his nine-year career. He signed a four-year contract worth $23.5 million with the Ravens. It includes a $4 million signing bonus, $4 million guaranteed, and an average annual salary of $5.87 million.

This was Carr's second time as a free agent after signing with the Cowboys in 2012. He was one of the top players on the market give years ago after intercepting a career high four passes with the Chiefs. However, things were a bit different this time around.

"It has been a process— this free agency, the second time around. Patience took over; I just knew a good situation was going to come, and I am blessed," Carr said at his first press conference as a Raven on Monday, March 20, 2017. "To be able to enter year 10 [with] a different organization, an organization that emphasizes the importance of defense, an organization that also emphasizes the importance of being in the community. Those are two things that really played a key factor into me making the decision to come to Baltimore."

Carr has always admired what the Ravens have stood for over the years. He is excited to be able to now join the organization.

"The Baltimore Ravens quickly became a team that, as a defender, you took note of and you would wish someday, you would get closer to the organization," Carr explained. "I could not really sleep last night. I was just trying to get ready for this day. I didn’t know what to expect. I just wanted to get in the building just to finally feel like I am a Raven.

Baltimore has had its share of injured defensive backs recently. Smith is their best defensive back but has dealt with multiple foot injuries in his career. Adding a player like Carr who has never missed a game in his career gives the Ravens a reliable starter that can help their secondary.

Even though the Ravens have three solid starting corners, a team can never have too many, so don’t be surprised if the Ravens add a cornerback in the 2017 NFL Draft.