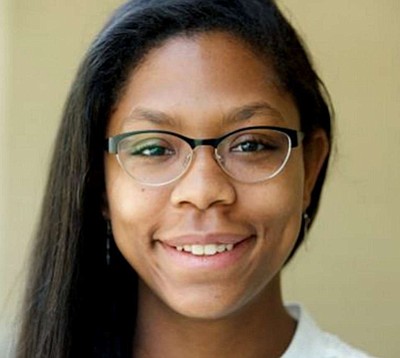 Bianca Hand, a graduate of KIPP Baltimore Schools, has been selected as one of 14 fellows to participate in KIPP’s national Alumni Leadership Accelerator,a program that aims to equip former graduates from the non-profit education institution for top leadership roles in their chosen fields.

The KIPP Alumni Leadership Accelerator counts as a nine-month, early-career fellowship for college graduates who completed middle or high school at a KIPP school.

The 14 fellows in the cohort attended KIPP schools in Baltimore, North Carolina, New York, Houston, Memphis, and New Jersey. All are people of color from under-resourced communities who were chosen for their drive and leadership potential, officials said.

“When I got an email to let me know I was accepted into the program, I was really excited,” said Hand, a Baltimore native and a graduate of the College of Wooster, where she pursued a career in fine arts curation and museum administration. “It’s hard to explain what this means for my future. I didn’t know how much this would do for my career because others in the program are business professionals and I’m into museum curation.”

Hand quickly discovered, however, that the program not only served to boost her career, but she says she was able to discern how it could be a springboard to personal success.“It’s been eye-opening to me on how I can develop as a professional within a professional environment,” Hand said. “It showed me how I can tackle problems head-on and be more creative. There are solid lessons that I keep,” she said.

The program’s goal is to address the leadership opportunity gap that KIPP alumni face when they enter the workforce, particularly those in careers where individuals— like those in the program—are underrepresented in leadership.

Each fellow receives 12 to 15 hours of personalized, one-on-one executive leadership coaching, as well as ongoing networking and mentorship opportunities and peer support.

In a field with relatively few women of color in leadership positions, Hand hopes to help institutions increase the cultural diversity of their staffs.

Hand's resume touts work in arts administration and development at several Baltimore cultural institutions, including the Walters Art Museum and the Handel Choir of Baltimore. Through KIPP’s program, she has had the opportunity to connect with one of the few African-American women to serve as a chief curator and director for a major art museum.

“Bianca is a remarkable young leader, and we are so excited that she has this opportunity to build her career network and skills,” Marsha Reeves, executive director of KIPP Baltimore, said in a statement. “The Alumni Leadership Accelerator is making sure that more young people like Bianca have the tools and connections they need to make a real difference in our community.”

Currently pursuing a doctorate at Johns Hopkins University, Hand says her goals include helping to create and implement strategic plans for institutions to develop and maintain culturally diverse staff members through programming,internships and fellowships.

Her interest in museums extends from the Walters Art Museum where two years ago she discovered, among other things curators focused on showing, that there are more than just Europeans in Europe.

“When I think of history, or art history of that time, people of color didn’t exist but people who were controlling the narrative were those who had a lot of societal connections,” Hand said, adding that she discovered the beautiful works of Africans.

Her work, along with other alumni that attended KIPP’s program has impressed officials at the nonprofit network of college-preparatory, public charter schools that educates elementary, middle and high school students.

“We’re working to create pathways for our top alumni to accelerate their career trajectory,” said Stephen Cockrell, KIPP’s national Director of External Impact, who oversees the program. “We want our fellows to ascend to the highest levels of leadership so they can have an outsized impact on the world.”