It's all in the family for new Ravens CB Marlon Humphrey 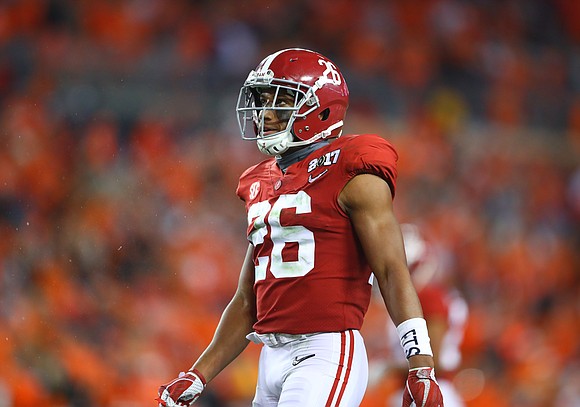 Alabama cornerback Marlon Humphrey plays to the crowd before the 2016 National Championship game against Clemson. Humphrey was selected by the Baltimore Ravens as their first-round draft pick on April 27, 2017. Courtesy Photo/AL.com

Being the son of a professional football player can put a lot of pressure on a young man, especially when he plays football also. For new Baltimore Ravens cornerback Marlon Humphrey, the pressure was controlled during his early years.

Marlon's father, Bobby Humphrey was a running back for the Miami Dolphins, Denver Broncos and Buffalo Bills in the early 1990s. Marlon was not allowed to play football until the sixth grade,despite his desire to do so.

The excitement and love for the game mounted as he waited and waited to play. Once he was able to play, he knew he found something that he loved to do. He felt special when playing football—it's a sport that runs in the family.

"My whole family is pretty athletic and I have always wanted to surpass my dad— a great Alabama running back, NFL running back," Humphrey said at his opening press conference on Friday.

"My mom is a track star; my brother is a football star. Everybody in my family—it kind of seemed like a family competition. I would not really say it was pressure, it was just more family fun."

Marlon's older brother landed a full scholarship to Arkansas to play football. He wanted to be like his brother but took it a step further by following their father's footsteps to Alabama and now the NFL.

Initially, Marlon played running back just like his father. As it turned out, a position change was the right thing for him. Marlon wanted to be the one delivering the hits instead of getting them, sohe switched to defense.

Following his father as a successful football player has placed its share of pressure on Marlon but he felt fully equipped to handle it. His father was there for him throughout the process.

“I guess when you have a dad that played in the NFL, it kind of seemed like he did not really give me that much advice throughout this process but he has kind of given me advice my whole

life," Humphrey explained. "The things he seemed to tell me during this process I kind of already knew. I can remember all the way back when I was 10 years old, he was just telling me stories that he has had in the past— things he has done wrong and things that he has done right. Growing up, he kind of gave me advice my whole life, kind of for this moment. Having a dad [who] is always there and has been there, done that— I think it has definitely been a tremendous help for me.”

The addition of Humphrey along and some of the free agent moves the team made should pay off this season for Baltimore. What was once an area for improvement is now an area of strength for the Ravens.