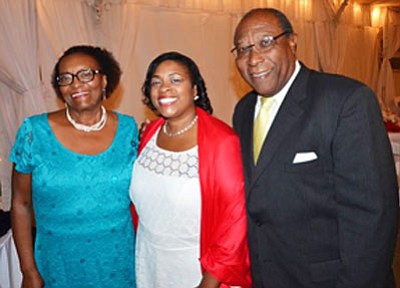 Cylia Lowe-Smith, Esq. (middle) with her parents Cynthia Minnifee Lowe (left) and Dr. Herbert Lowe (right) at the Junior League of Baltimore Annual Dinner and Awards. The Minnifee-Lowe Diversity & Inclusion Fund was established in their honor that evening to support diversity and inclusion programs at the JLB. Lowe-Smith was the first African American woman in the 104 year history of the Junior League of Baltimore (JLB) to serve as president. Courtesy Photo

Lowe joined the JLB in 2008 and found the Junior League’s approach to leadership development for women very unique. She remembers being asked as a part of her new member class “Where do you see yourself in the League in five to 10 years?” I asked the Chair ‘Do you

REALLY want to know this answer?’ and she said ‘YES! We do! If you want to be president one day; we want to make sure you are as prepared as possible. We already know it will be a hard job but we want to give you everything you need in terms of trainings, experiences and mentors to feel ready to take it on!’

“I really liked that,” recalled Lowe. “So I checked off the box for president in 5-10 years, and eight years later here I am! The Junior League gave me everything it promised and I will forever be grateful for that. The Junior League provides a safe place for women to learn and grow as leaders. The membership structure is set up in such a way that young women are Actives and they are the ones who are the members that serve on the board of directors, chair committees, create service projects and do most of the work of the League. The expectation is that you are ‘learning on the job,’ which is very different from many other organizations that expect you to step up only when you are 110 percent ready. That is not to say there were not significant challenges along the way, but I truly valued that unique opportunity; it increased my creativity, self-confidence and taught me that it was ok to ask for help. I know whatever other leadership opportunities I am blessed to experience in the years to come; the League played a significant role in preparing me for them.”

In fact, Lowe-Smith was recently elected as the vice president of the 95-year-old Epsilon Omega chapter of Alpha Kappa Alpha Sorority, Inc., (AKA) located in Baltimore city. The Epsilon Omega chapter was the first graduate chapter of AKA established in the North Atlantic Region, which spans from Maine to Washington, D.C. In that role, Lowe-Smith is responsible for the chapter’s implementation of the International Programs of Service. With a chapter membership of almost 300 strong, that is a tall order to say the least, but her experience as the JLB President laid a strong foundation for her work in the community now.

In addition to hosting speakers for her own League, Lowe was highly sought after as a guest speaker throughout the country as well discussing the value of diversity and inclusion in membership organizations.

When asked what was next, Lowe-Smith says that although she applied for an International Junior League Board position, she was not slated (selected by the Nominating Committee to run). So as far as Junior League is concerned, she is enjoying being a Sustainer and Past President. She was recently tapped to serve as the Workshops Chairman for the 86th AKA North Atlantic Regional Conference held in Baltimore in April. In that role she is charged with organizing and coordinating over 20 leadership development workshops for the more than 5,000 registered attendees.

“While I was disappointed that I was not selected to serve at the next level of the Junior League, I am a newlywed, actively engaged in the community, working full time as an attorney, and managing my own small business, so my hands are full, and I truly believe the saying: God makes no mistakes!” said Lowe-Smith.

For more information about Cylia Lowe-Smith, visit her website: www.CyliaLowe.com