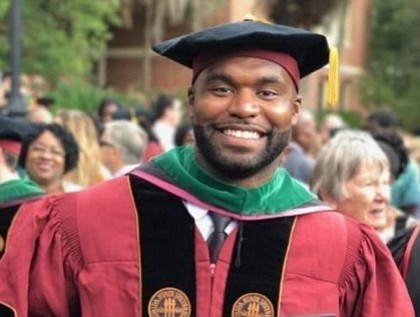 (CNN) — When Myron Rolle, 30, begins his neurosurgery residency at Harvard Medical School and Massachusetts General Hospital in June, he will be making history.

Before him, "there hasn't really been anybody who I saw doing NFL and neurosurgery," the 6-foot-2 former NFL player said in an interview with CNN's chief medical correspondent, Dr. Sanjay Gupta.

Now, Rolle will be treating patients and training amid concerns and contention within the medical field about the safety of American football. He wants to help his two worlds -- medicine and football -- find common ground, he said.

Not until "toward the end of my career, I started to think about concussions and what the effects of repetitive concussions can do," he said.

"Football has done so much for me, given me friends, family, given me life lessons that now I can use in the operating room or just as a leader," he said. "I would hate to see it go, and I would love to see it around."

A blow to the head, such as what might be experienced during a tackle in a football game, can cause a concussion, a type of traumatic brain injury.

Rolle believes he has a duty to talk to younger players about safely playing the sport he loves.

"The fundamentals have to be emphasized: tackling the correct way. Having the right equipment. Making sure that you don't have very violent practices or contact practices," said Rolle, who sees brain injuries in sports and pediatrics as specialties of interest.

"I will tell you in person, 'Yes, play, but be careful; be safe, and understand some of these things that need to go into it for you to enjoy it,' " he said.

Rolle's interest in both neuroscience and football started at a young age, with help from his four older brothers: Marchant, Marvis, Mordecai and McKinley.

He was in the fifth grade when he read the book "Gifted Hands" by Dr. Ben Carson, which sparked his interest in medicine. Since then, Rolle said, neurosurgeon Carson has become something of a mentor.

"That kind of propelled him into that area," Whitney said.

While Marchant gave Myron books to read, his third oldest brother, Mordecai, taught him the game of football.

Myron quickly excelled on the field, and McKinley, the brother closest in age to Myron, often trained with him. Now, McKinley is a high school football coach and teacher in Florida, where he also serves as Myron's business manager.

Growing up, Whitney said, Myron's older brothers not only encouraged him to pursue his dreams, they also had his back.

When the boys were children, "they put dishwashing liquid in the aquarium, and let me tell you, the entire living room was in bubbles," Whitney said, chuckling at the memory.

At the time, Whitney repeatedly asked his sons who was behind the bubble prank. No one answered.

"I threatened them. I told them I was going to punish them, and they would not tell on each other. Nobody would squeal," Whitney said.