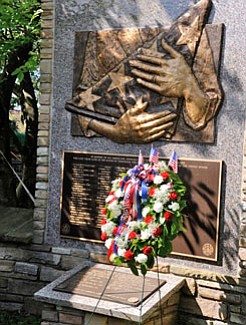 The annual Memorial Day Ceremony will be held on Monday, May 29, 2017 at 1 a.m. at the Monument at Circle of the Immortals in Dulaney Valley Memorial Gardens. The ceremony will salute the men and women of the armed forces who have paid the highest price in defense of the United States of America, including: four Marylanders killed in the past 14 months. Courtesy Photo/Dulaney Valley Memorial Gardensn

BALTIMORE — The annual Memorial Day Ceremony at Dulaney Valley Memorial Gardens will salute the men and women of the armed forces who have paid the highest price in defense of the United States of America and honor four Marylanders killed in the past 14 months. The traditional patriotic ceremony will feature a slate of local participants and dignitaries, including keynote speaker NASA Astronaut and Baltimore native, G. Reid Wiseman, (Commander, U.S. Navy).

In addition to honoring those fighting the battles of today and those who gave their lives in Korea, Vietnam and World War II, the 2017 ceremony will honor: Airman 1st Class Nathaniel H. McDavitt of Severna Park, Md., killed on April 15, 2016 in Jordan by the Islamic State; Private First Class Victor Stanfill of Fulton, Md., died on May 10, 2016 from injuries suffered during a live-fire training exercise at Fort Polk, La.; Staff Sgt. Adam S. Thomas of Takoma Park, Md., killed by an improvised bomb blast on October 4, 12016, during a mission against the Islamic State's Afghan branch; and Sgt. First Class Allan E. Brown of Takoma Park, Md., died on December 6, 2016, from wounds suffered in a suicide bomb attack in Afghanistan the previous month.

This year marks the 50th anniversary of the Memorial Day ceremony held in Dulaney Valley’s Circle of Immortals, an area dedicated in 1967 and reserved for Marylanders killed in action. Twenty-six service members who died in Vietnam are buried within the Circle. The area is also home to the official Baltimore County World War II/Korean War Memorial, dedicated in 1998; and The Children of Liberty Memorial, which was added to the Circle in 1990 and is dedicated to Maryland servicemen and women who died at the hands of terrorists. It includes a plaque dedicated to the seven Maryland service members who lost their lives in the 1991 Liberation of Kuwait, the names of the three Maryland servicemen killed in 2000 aboard the USS Cole and the names of the service members killed in the September 11, 2001 attack on the Pentagon.

The annual Memorial Day ceremony at Dulaney Valley Memorial Gardens is a legacy of the former owners, the Armiger Family, who felt the public was losing sight of the meaning of Memorial Day.

The ceremony, which is free and open to the public begins at 10 a.m., at Dulaney Valley Memorial Gardens, Circle of the Immortals, 200 East Padonia Road, Timonium, Md.