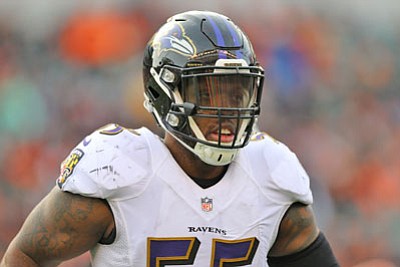 Ravens OLB Terrell Suggs looks into the huddle before a play during the final game of the 2016 NFL season against the Cincinnati Bengals. Courtesy Photo/NFL.com

BALTIMORE — The 2017 season is a pivotal season for the Baltimore Ravens and head coach John Harbaugh. Entering his tenth season with the Ravens this year, Harbaugh is coming off of his second consecutive year in which his team failed to make the playoffs.

Baltimore finished the 2016 season with an 8 - 8 record, which landed them in second place among their AFC North rivals. The Ravens are currently experiencing the longest playoff drought under Harbaugh’s leadership.

By no means is his job in jeopardy. However, it's time for the Ravens to get back to their winning ways. Success has become the expectation for Baltimore after establishing themselves as one of the most competitive teams under their fiery head coach.

The additions of cornerback Marlon Humphrey, as well as outside linebackers Tyus Bowser and Tim Williams from the 2017 NFL draft, should help improve the defense. Baltimore has a mixture of youth and veterans on the roster but time is running short for some of the older players.

Most notably, defensive leader Terrell Suggs is 34 years old and entering his 15th season. Coming off of an Achilles injury, Suggs showed he still has some left in the tank by logging eight sacks last year.

How much longer Suggs can go on remains to be seen, but he is one of the last ties to the Ravens' championship days.

Joe Flacco came to Baltimore the same year that Harbaugh did. The two have accounted for an 88 - 59 regular season as well as a 10 - 5 record in the playoffs. Their most notable season together was in 2012 when they won Super Bowl XLVII.

Flacco posted a career-high 4,317 passing yards in 2016. He isn't showing any signs of slowing down, but the weapons around him need to step up now that Steve Smith Sr. has retired.

Mike Wallace was Baltimore's biggest threat as a receiver as he posted a rare 1,000-yard season for a Ravens wideout. Wallace is set to become a free agent after this season.

The AFC North has been a game of musical chairs when it comes to division winners. The Pittsburgh Steelers, Cincinatti Bengals and Ravens have taken turns as division champions over the last seven years.