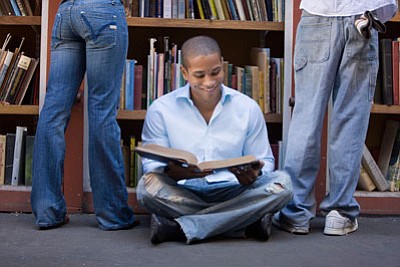 Author and publisher David Bruce Smith urges parents and teachers to provide the kids in their charge with good books— fiction and nonfiction-based on historical fact. ClipArt.com

Washington D.C — "As thankful as we might be for the productive technological innovations of the 21st Century, it is important to recognize that the digital society we've created has pitfalls, particularly for our youngest citizens," said author and publisher David Bruce Smith.

According to Smith, the "new" electronic world fosters apathy instead of empathy and a new study out of the U.K. appears to prove it.

"Researchers at London's Kingston University discovered that kids who spend more time playing with high-tech toys over reading a good book are at risk of becoming disinterested and disassociated. Their data revealed that readers have more positive social attitudes," said Smith.

Smith describes himself as an ardent advocate of encouraging young Americans to absorb the history of the United States, in particular. He urges parents and teachers to provide the kids in their charge with good books— fiction and nonfiction-based on historical fact.

"I try to facilitate this task because it's a way of providing our future generations with the knowledge they need to become productive, participative citizens," said Smith.

Smith cites Thomas Jefferson, the main author of the Declaration of Independence, the third president of the United States and the founder of the University of Virginia who said: "...apprising [students] of the past will enable them to judge the future; it will avail them of the experience of other times and other nations; it will qualify them as judges of the actions and designs of men; it will enable them to know ambition under every disguise it may assume; and knowing it, to defeat its views."

It's not just Smith who relies on the words of Thomas Jefferson to make the case for books— page-turners, if you will— as teaching tools.

Annie Holmquist, in a recent article for the Minnesota-based think-tank Intellectual Takeout, described Jefferson as an early believer in using books to motivate young learners because of the virtuous morals, which they teach the reader.

As Jefferson put it: "Everything is useful which contributes to fix in the principles and practices of virtue. When any original act of charity or of gratitude, for instance, is presented either to our sight or imagination, we are deeply impressed with its beauty and feel a strong desire in ourselves of doing charitable and grateful acts also. On the contrary, when we see or read of any atrocious deed, we are disgusted with it's deformity, and conceive an abhorrence of vice. Now every emotion of this kind is an exercise of our virtuous dispositions, and dispositions of the mind, like limbs of the body acquire strength by exercise."

The Grateful American Book Prize is accepting entries for its 2017 award. Works of historical fiction and nonfiction for children 11 to 15 years of age published between July 1, 2016 and July 31, 2017 qualify. The Prize is among the most lucrative for literary accomplishment, $13,000— thirteen for the number of original colonies. In addition, two "Honorable Mention" winners receive $500 each.

For more information about The Prize or to make a submission, visit: www.gratefulamericanbookprize.com/submission-form/.