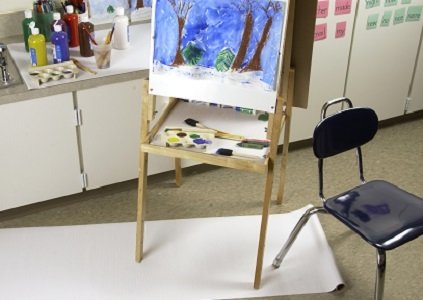 continued — Though her daughter didn't hear those kinds of comments at school, Pearlman still feels that the reprimands she received for what she wore could make her feel self-conscious about her body.

"I think there are these subtle messages that sort of carry on that we shouldn't show something. Why shouldn't we show something? Because something's wrong with our body," she said. "We need to be teaching the boys what appropriate behavior is instead of teaching the girls that they have to cover up to protect themselves from the boys."

Pearlman's daughter is not alone.

There have been countless examples, many shared on social media, of girls being shamed for the clothing they wear. One woman wrote about how her 9-year-old granddaughter wore a tank top on a 99-degree day and was told she was violating the school dress code.

"What happened was totally humiliating to her," wrote Laurie Levy, a retired preschool director, in a blog post for Chicago Now. The teacher sent the girl to the school nurse, where she was told to change out of her top and wear a boy's short-sleeved undershirt instead, according to Levy, author of "Terribly Strange and Wonderfully Real: On Belonging, Loving, Evolving, Advocating, Musing, and Letting Go."

"I'm not sure what the purpose of a dress code is for such young kids other than to make them feel ashamed of how they look or the clothing their families have purchased for them," she said. "In middle school, however, dress codes for girls become downright discriminatory. By that age, tight yoga pants, cropped shorts, very short shorts and close fitting tank tops are, well, revealing for some girls. For the late bloomers, not so much."

One 15-year-old girl, who we're not naming to protect her privacy, said she was given an in-school suspension for wearing shorts that were to her mid-thigh. Her teacher suggested that her clothing was suggestive and that she was "asking for it."

She says boys wear shorts that are shorter than hers and don't get in trouble.

"I feel bad because it's my body ... and there's no reason for the school to be telling me that I have to cover it up," she said.

The message her school is sending her, she said, is that she should cover up and be ashamed. "If I show a little bit of my body, I'm considered a bad girl," she said. "Just because I'm wearing this doesn't mean that I want people to look at me sexually. I want to be seen as a woman. I don't want to have to feel bad about my body."

In response to concerns about school dress codes, there are plenty of people who take the "rules are the rules" approach and believe that while people might not like the rules, they still need to follow them.

"Your child's 'likes and dislikes' do not supercede the rules and regulations set forth by your current school district that you reside in and pay taxes to," one person wrote in the comments section under Pearlman's blog post. "Sometimes we do have to wear things we aren't wild about. I didn't like wearing my lab coat, scrubs, goggles, but I did it."