What you should know before buying sunglasses 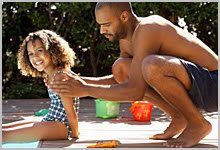 Learn simple steps you can take to protect your body from sun damage and still enjoy the sun’s healthful effects. (From NIH News in Health)

continued — Other conditions caused by too much unprotected time in the sun may have longer-term consequences, according to Pettey. Pterygium, for instance, is a growth of fleshy tissue that can cover part of the cornea and hurt your vision. This is sometimes called "surfer's eye."

Thau says the latter is the more serious of the two complications.

"Cataracts can be removed surgically, but macular degeneration is yours for life," she said. "It literally causes damage to the photo receptors. It's like damaging film in a camera, and you cannot replace the film."

One other long-term danger of looking directly at the sun is solar retinopathy. Just like your mother told you, don't ever look directly at a solar eclipse, such as the one coming August 21.

"If you were to look at that level of radiation, even for a few seconds, without the brightness of the light telling you to look away because it would be painful, you can actually cause burns on the retina in the back," Thau said. These burns cause permanent damage to your sight, and regular sunglasses are not enough protection for a solar eclipse.

Though the sun is the main cause of UV radiation damage, artificial sources such as tanning beds, lasers and welding machines also produce UV radiation that might damage vision.

One other consideration at least for some is their location on the globe, Diaz said.

"We have more sunny days in the South, especially in Florida, and the West, especially in California, than in other areas of the US, and therefore, we see more sun-related injuries," said Diaz, who has researched this topic. Naturally, this is also true for the sunniest spots around the globe.

"Another problem in the coastal South and all coastal areas is the reflected magnification of UV radiation off of surface waters," Diaz said. UV-blocking sunglasses protect against these reflections, but there is a risk of the same complications that result from direct sunlight.

Beyond the standard UV recommendations, does polarization matter?

"I like to fish, and polarized lenses will reduce reflection and glare off surface waters and allow one to see at a greater depth," Diaz said.

Thau says this is not mandatory, "it's just an optional add-on benefit you can have."

Though most of us are concerned with eye health, the Vision Council reports that only 31% of Americans always wear sunglasses when outside.

They're not merely a fashion statement, insists Thau, but if that gets you to wear them, go with it. She herself owns five pairs and has been known to put them on even when sitting in a bright room.

To be safest, Thau recommends that an annual comprehensive eye examination with a credentialed doctor to learn more about eye health and which sunglasses might be most beneficial in any given circumstance.

"It's also important for children to start with some protection early, because it's cumulative damage over time," Thau said. "My family does not walk out the door without their sunglasses on, except at night."