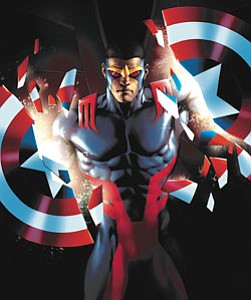 Award-winning writer and producer Rodney Barnes grew up in Annapolis. He returns to the area to launch his first ongoing Marvel comic book series called “Falcon #1” on October 11, 2017, at Twilite Zone Comics located at 18 Crain Highway North in Glen Burnie, Maryland from from 11 a.m. to 1 p.m. Courtesy Photo

ANNAPOLIS — Award-winning writer and producer Rodney Barnes recalls walking to a convenience store on the corner of Chesapeake Avenue and 6th Street in Annapolis, Maryland, where he would read comics for hours. The Annapolis native can now add Marvel comic book writer to his impressive resume.

Barnes has worked on projects such as Everybody Hates Chris (Chris Rock), the Boondocks, and My Wife and Kids. He is said to be a rising African American creative in Hollywood.

Barnes returns to the area to launch his first ongoing Marvel comic book series called “Falcon #1” on October 11, 2017, at Twilite Zone Comics located at 18 Crain Highway North in Glen Burnie, Maryland from from 11 a.m. to 1 p.m. The public is also invited to attend an evening social at Mt. Zion United Methodist Church, located at 612 Second Street in Annapolis from 7 p.m. to 9 p.m. Comic books will be available for sale at both venues.

In the seventies, Barnes shared his hobby of reading and collecting comic books with old friends in Eastport such as John “Bumper” Moyer, who owns Twilite Zone Comics.

“Besides the fun of having a number one comic that is signed by the writer—and that’s the memorabilia aspect of that—the kids and even adults will get to see somebody who… made his fame in Los Angeles, and moved there,” said “Bumper,” when talking about Barnes’s upcoming launch event. “A lot of people have that dream. They would love to, in some creative way, go out and be successful and Rodney actually made that dream happen.”

Bumper’s father and Zastrow Simms made Barnes feel like someone in the community cared. He was among youth they took to basketball games and the movies. Barnes recognizes the value of growing up in a supportive place.

“But the big thing for me, I think if I had not grown up in Annapolis, I would not be doing what I do right now,” Barnes said. “Growing up in Annapolis when I did, gave me enough space and had the right ingredients of history, and the tenor and temperament of the community.”

His Hollywood dream began in his mid-20s, after a friend asked what he would do if he could achieve his biggest goal. Barnes replied that he would love to write movies and television shows in Hollywood. He later became a production assistant while working on movies in the area. Barnes met a famous contact in Charlottesville, Virginia, when he worked on a movie called Major Payne.

“I met Damon Wayans. Damon and I hit it off, and he asked me what I wanted to do with my career, and I told him that I wanted to be a writer. He gave me an opportunity to work with him for a few years. Eventually, I [went] to California and I worked on the movie, Bulletproof. He told me that if I was to take this seriously, I had to move [to California] because that’s what writers do,” Barnes said. “I packed up my stuff and I lived in my car for about eight months and started to ply my trade. By day I would work on movies and TV shows as a production assistant, or assistant director, and then at night I would write. And eventually Damon had a show, My Wife and Kids, and he gave me a job as a punch up writer (a script doctor) for a day, and that day turned into 20 years.”

Despite Barnes’s success, he acknowledges his previous struggles trying to survive in California around 1997. Even though he was tempted to come home, he decided to stay and take it day-by-day, after speaking with an encouraging friend. Shortly thereafter, things turned around for Barnes with the opportunity to write for the show, “My Wife and Kids.”

“What I’ve come to learn is that if you truly put your heart into something, like really, truly commit, it’s limitless what you can do,” Barnes said.

When Barnes returns to his hometown to celebrate his Marvel comic book project, he says he is open to discussing other facets of his career and the aspirations of budding writers who are seeking advice.

“Now being where I am, and doing what I am doing, I would love to be able to come back and build a relationship with the community,” Barnes said.