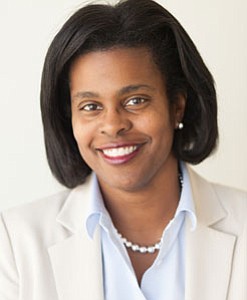 BALTIMORE — Over the past 14 months Dr. Sonja Brookins Santelises says she has worked hard to address the many issues facing Baltimore City Schools, which she heard about from community stakeholders and others.

Santelises, who took over more than a year ago from Gregory Thornton, says she has worked in step with the district’s new blueprint, which lays out how officials, educators, parents, students and others will move

toward the ultimate goal of building a generation of young people with the skills, knowledge and understanding to succeed in college, careers, and the community.

“Not just here in Baltimore, but wherever they go in the world, whatever they do after they graduate high school,” Santelises said.

This year, Baltimore City Schools is pursuing a comprehensive approach designed to ensure that all students have access to high-performing schools that “meet their needs and interests, no matter where they live in the city,” Santelises said.

The blueprint is designed to focus on three key areas.

She noted that those three areas are intertwined in that, if students are motivated and excited about learning and they have the foundational skills to think critically, analyze deeply and express themselves powerfully with adults around them who encourage them to persist and excel, they will be positioned to move steadily toward high school graduation and postsecondary success.

Santelises, 49, has spent close to three decades focused on building high-quality teaching and learning to help students excel, including her tenure as chief academic officer for Baltimore City Public Schools from 2010 to 2013, according to her district-issued bio.

She returned to Baltimore City schools in July 2016 after serving three years as vice president for K-12 policy and practice at the Education Trust, a nonprofit focused on closing the achievement gap experienced disproportionately by African-American, Latino, and Native students and those from low-income families.

Santelises began her career in education as director of professional development placement with Teach for America in New York.

Throughout her career as an educator, academic and administrator, Santelises says she has been steadfast in her belief that excellence in urban education is achievable at scale.

“Our students have the same capacity for success as any other students,” she said. “We must communicate and demonstrate our complete confidence in that capacity, by charting a pathway to success for each

individual child. The real challenge is ours— as educators— to hold ourselves and our students accountable for their achievement.”

Becoming the district’s fifth superintendent in a decade allows for skepticism because of the high-turnover rate at the position, but Santelises has her share of believers.

In a previously published interview, Freeman A. Hrabowski III, president of the University of Maryland, Baltimore, called Santelises’ hiring a good move by the district.

“She’s an innovator with the commitment to see big ideas through,” Hrabowski said. “She’s devoted her career to changing the status quo,” he said.

“The goal is educating a generation of Baltimoreans to lead; along the way, we have benchmarks,” Santelises said. “A method of steady improvement toward that goal is really what the public can expect.”

“The other piece is that we have these outlines— a blueprint— that the community should expect to see, she continued. “We’ve outlined things for every stakeholder group, what their roles are, what individual roles are and it gives you a picture of what you should be able to see as a result of the hard work.”